That's a double bass reflex, not a double chamber reflex, and the internal vent is a regular type rather than a resistive.

There are versions; the Dynaco A35 for example divided the cabinet internally, with a resistive vent in the divider. The theory was that at higher frequencies the bass unit only 'saw' a smaller volume; as frequency decreased the vent became increasingly transparent (acoustically speaking) and the full box volume was used. Better than just a sealed box of the same total internal volume? Maybe. Maybe not. Resistive vents are typically used when increased levels of acoustic damping of the alignment are desired (for e.g. a regular resistive vent box, the main value of which is to provide a lower system Q than would otherwise be possible in a cabinet of that volume).

Re passive radiators, typically their greatest use is in situations where a vent / duct of suitable CSA is too long to be an easy fit, or would suffer issues with self-resonances (ducts being 1/2 wave resonators). The most obvious example there are small boxes tuned low. A duct of small CSA may keep length down & avoid issues with harmonics, but the air velocity in the duct itself will be high, and potentially audible, particularly at higher SPLs. So you could create a DCR or DBR with passives if you wish; certainly not impossible. Whether there is any real advantage to doing so is another matter.
Last edited: 2020-03-02 2:41 pm
•••

PR might be done in some cases but certainly not cost effective unless making your own PR.

For a given overall volume, one can only do so much with tuning, shoving around chamber's resonances. Hornresp can do double bass reflex and also the dual chamber reflex.

Here's a classic dual chamber reflex with 2:1 chamber ratio, starting with classic tuning where all three vents are identical. Then FWIW, the effect of doubling area on vent 1 then vent 2 then vent 3 (interconnectng vent) effects on response are shown. Horresp can't to my knowledge apply fill to the vents in its ABC model. G.L. Augspurger who to my limited knowledge first described the dual chamber 3-vent bass reflex, later illustrated the effects of damping the inner vent with cheese cloth. IIRC, the notch disappeared but so did the upper null in cone excursion.

Hornresp can effectively shut off ports by specifying very small area and very long length. There may be some useful dual chamber
bass reflex situations besides the classic one.

btw - if one wanted to extend the exercise to a 3 chamber reflex, how would that be arranged port wise ? 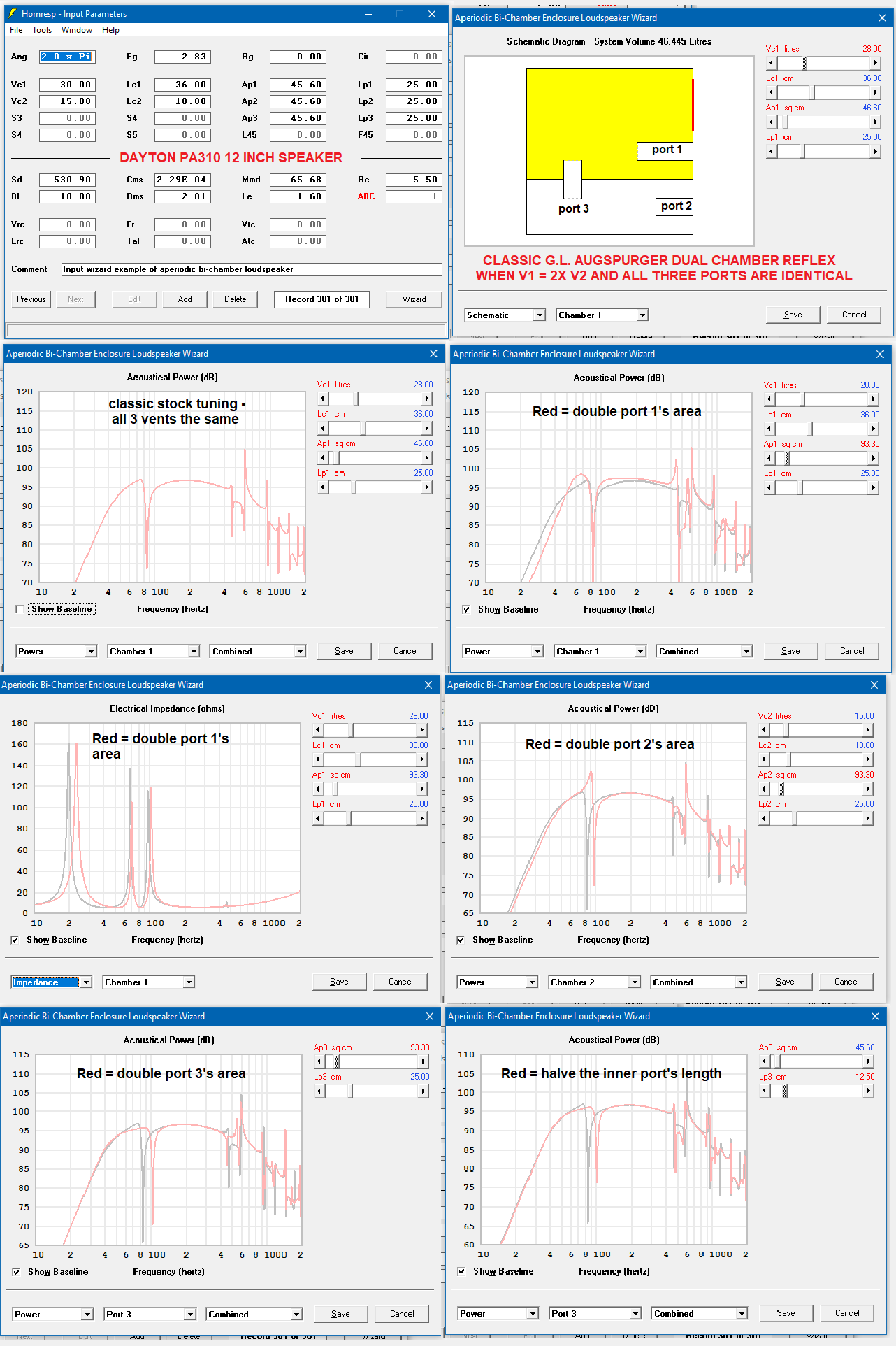 There is a special case of DBR were the woofer see a little chamber tuned high by an internal port, that exhaust in a bigger chamber, tuned at a lower freq., trough a port that faces the room. The chambers ratio is around 1/3-2/3 of the volume, that need to be somewhat bigger than a normal reflex. It works ok with low Vas, medium Qts little woofers.
(This Is me, at a diy contest, with one of those little thingies)

Yes, that's a DBR (double bass reflex), most commonly associated with Fostex; AFAIK it was developed independently rather than a derivative of the DCR (as in large driver chamber, lower interconnected secondary, and both being vented to the room).
•••

Wd a DBR work with an aperiodic added to small enclosure perhaps, to reduce Q and size overall
•••

Thats v interesting.. thanks for posting
•••

I believe NAIM did something like that. Small chamber w driver, resistive vent to much larger chamber.

As described by Scott, the idea being that the large enclosure is only seen at the lowest frequencies.

hornresp has a double bass reflex model ready to go in its input help menu, but
doesn't allow damping of vents 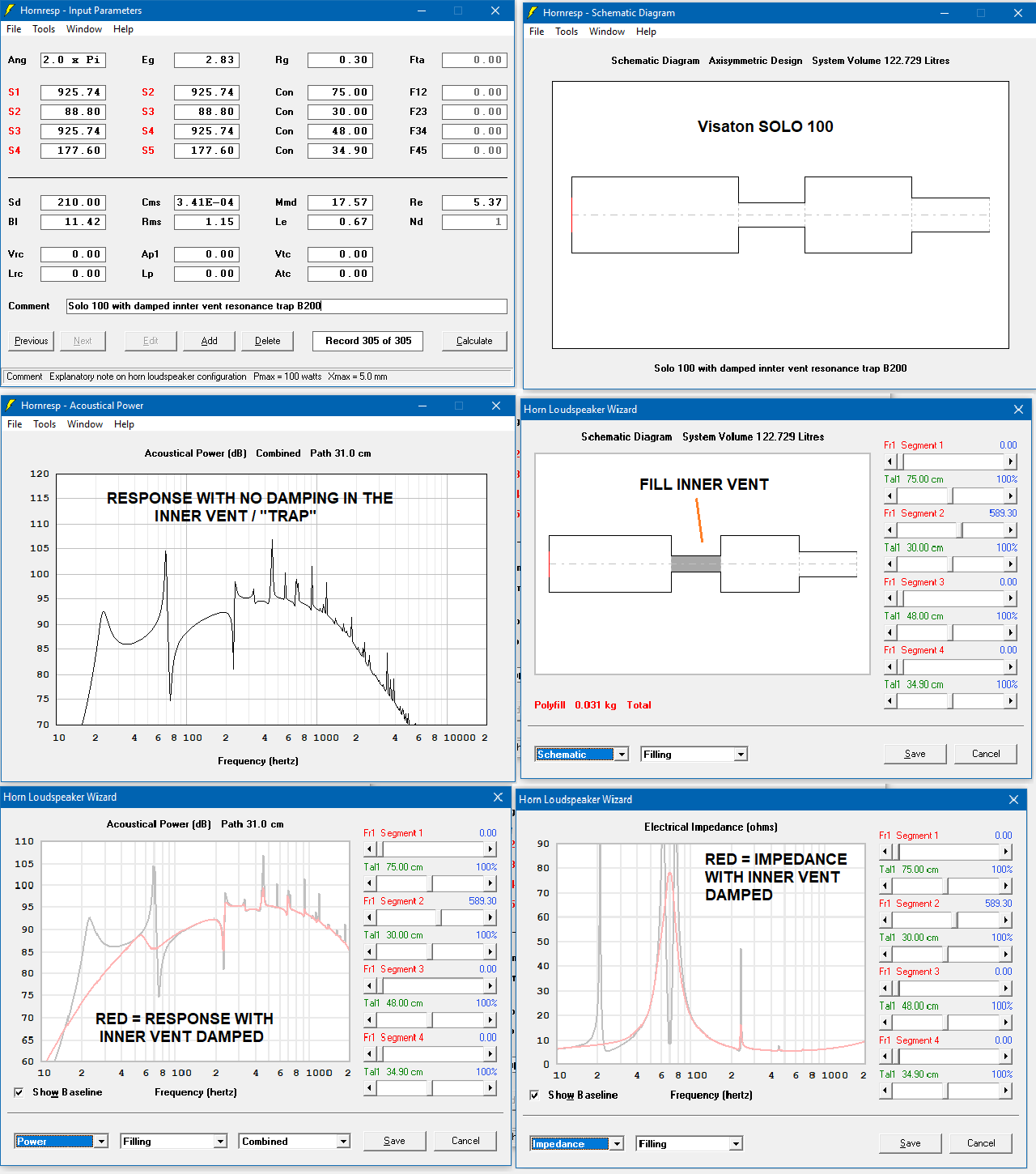 If resistive vent was venting outside on driver chamber with port between chambers (and ported larger chamber), what wd the result be?
•••

if highly resistive than that driver chamber port would cease to radiate dual chamber reflex would behave more like a double bass reflex.
•••

Hmm maybe the aperoidic wd be heavily stuffed. I guess that chamber wd need to be the 1/3 one.
•••

These are not fixed ratios except for the DCR. As you can see from the A35 I referred to & Dave posted his CAD drawing of above, twin-chamber boxes with a resistive vent ('aperiodic' is a complete misnomer for these enclosures) do not necessarily follow any specific, although if unequal volumes are used, the driver tends to be in the smaller.
•••

Scottmoose said:
These are not fixed ratios except for the DCR. As you can see from the A35 I referred to & Dave posted his CAD drawing of above, twin-chamber boxes with a resistive vent ('aperiodic' is a complete misnomer for these enclosures) do not necessarily follow any specific, although if unequal volumes are used, the driver tends to be in the smaller.
Click to expand...

Thanks Scottmoose this is interesting.
Will try and post a sketch later

I wasnt going to stuff partition vent/port, instead have fairly well stuffed/resistive vent exiting smaller enclosure behind driver. Larger enclosure wd have port and port between chamber (same size). I guess v similar to Fostex design but adding the outer resistive vent to driver chamber
Hope this will work and glsd u mentioned ratio ad i dont think enclosure volume will be classic ratio

So a Fostex type DBR with a resistive vent to the room in the small chamber?

Well, you can do that, but TBH I'm not certain what it would actually achieve. At low frequencies the driver should in effect 'see' / be using the total box volume, so all adding a resistive vent to the small chamber is likely to do is bleed off a little pressure & reduce output -probably not all that much since the internal and external undamped ducts will dominate.
•••

Yes exactly, you explained it in one sentence when it took me 10 &#55357;&#56833;
I'm not sure it isnt counterproductive- the main reason was due to design. The cab volumes are tight. Also the design of driver chamber almost necessitates a vent / port, the problem being that exit is directly behind driver.
I guess the pro's cd be flattening the impedance and maybe working better in the limited space avail. Small reduction in bass output may be beneficial in this case(2.5 way)
If it sounds like ways to justify it.. well yes &#55357;&#56834;
•••

Justification isn't required beyond 'I want to do it'. This is a hobby after all.
•••

use a hornresp input window like here. Click on the window to see things highlighted in "red" - that sets hornresp to work in steps

Enter the chambers and vents areas, and their lengths (to describe volume)

Select "Loudspeaker Wizard" - you then can examine response, etc. Select the sub-category of Response:fill. Play with density in that external exhaust vent to see the effects upon response, input impedance, cone excursion, group delay.