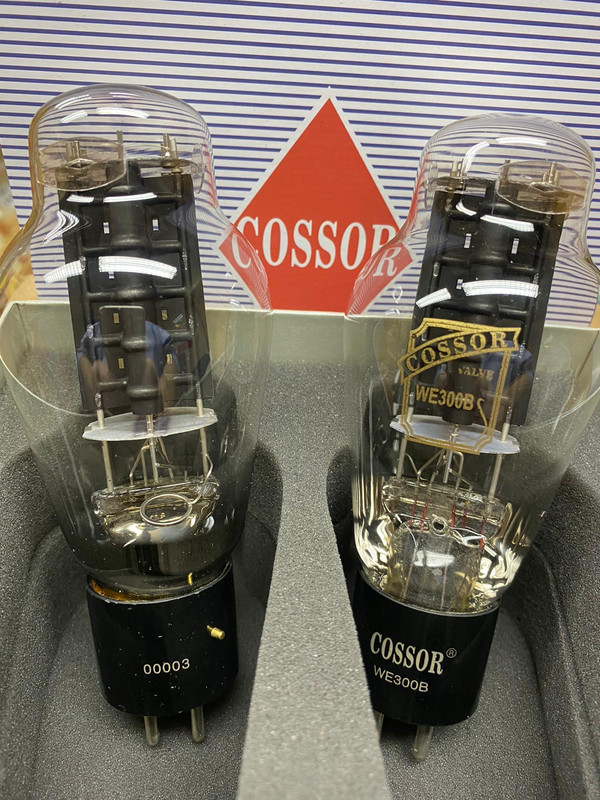 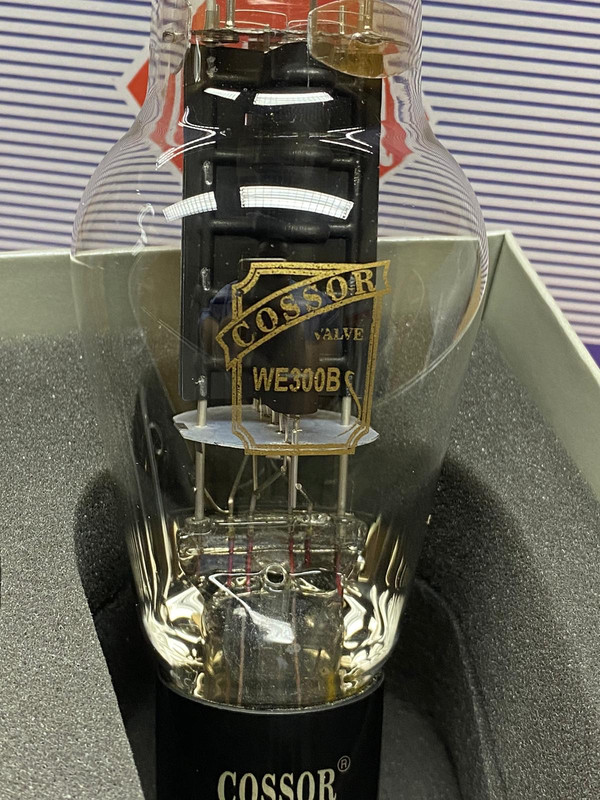 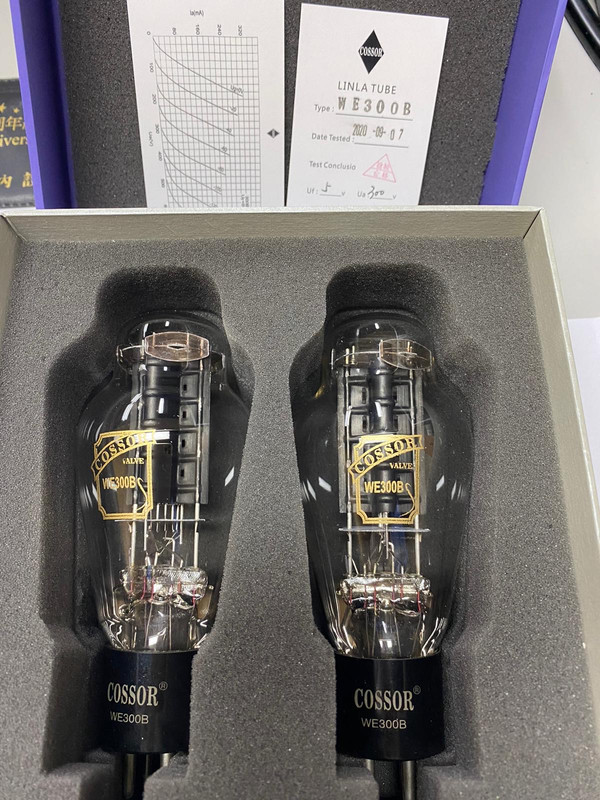 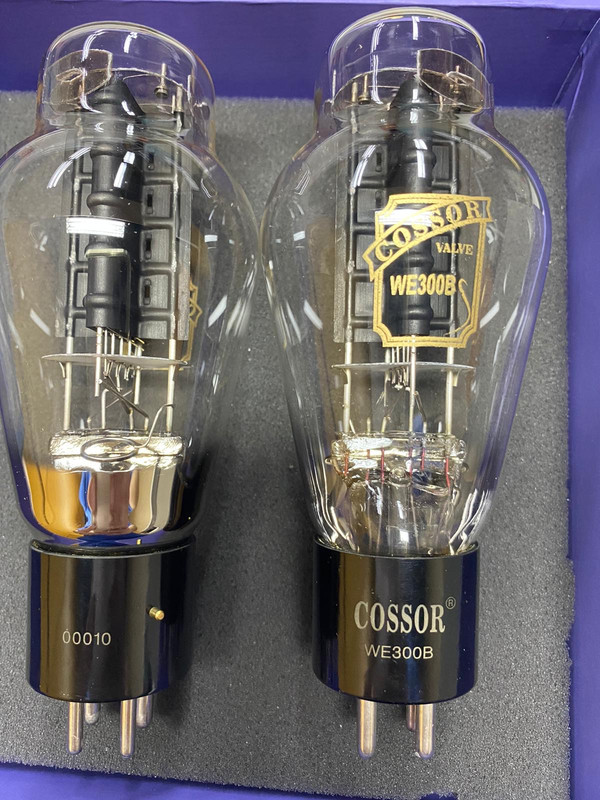 LINLAI's WE-series offering are identical to Psvane WE series. There is NO difference. They are 100%, identical, visually and electronically.

Overhung filament is extremely difficult to manufacture as a tiny discrepancy in spacing, fixture and material characteristics under extreme temperature can lead to more possible ‘failure’ in production. Overall, tube factory will face a much higher rate of ‘scrap’ even before a tube reaches the product finishing line. This leads to eventually higher overall production cost. Many tube factories deliberately stay away from this filament design.

just checking if you will ship to Australia and if so what the cost will be? thanks
•••

I can ship to Australia. Please email your address to me so that I can calculate the shipping
•••
M

Hi Victor ,I am interested in the Cossor set ,are they still available ,many thanks.
•••

Wow! even without any burn in time they are obviously better than the Gold Lion in every parameter!! Can't wait to hear them with a 100 or so hours of play time. I will post to DIY Audio in a couple of days!!

vkung said:
Wow! even without any burn in time they are obviously better than the Gold Lion in every parameter!! Can't wait to hear them with a 100 or so hours of play time. I will post to DIY Audio in a couple of days!!

I have about 30 hours on the Cossor 300B's. They continue to improve in every important sonic parameter. I listen, mostly, to classical, jazz, blues and vocals, so bear that in mind when considering my opinion.

In comparison to the Gold Lions, the improvement is markedly evident. The Cossor's have truer timbre, imaging and tighter, better defined bass. My preamp is also 300B and it has Shuguang 300B Black Treasure 50 year tubes. So a variety of combinations will have to be tried, as the new 300B's tubes mature.

I just received a pair of the new Western Electric 300B reissues. ( I placed the order January of last year!). It would be hard to argue that they should not be the the default benchmark upon which to do new 200B comparisons.

I will probably order another pair of the Cossors to try in the preamp so I can compare the Treasures, Cossor's and the new WE's. It will be interesting!

Here are some comparison pics.

It appears that the Cossor's have carbonized plates, the WE's are plain. The photo actually makes the appearance difference far greater than they actually are. 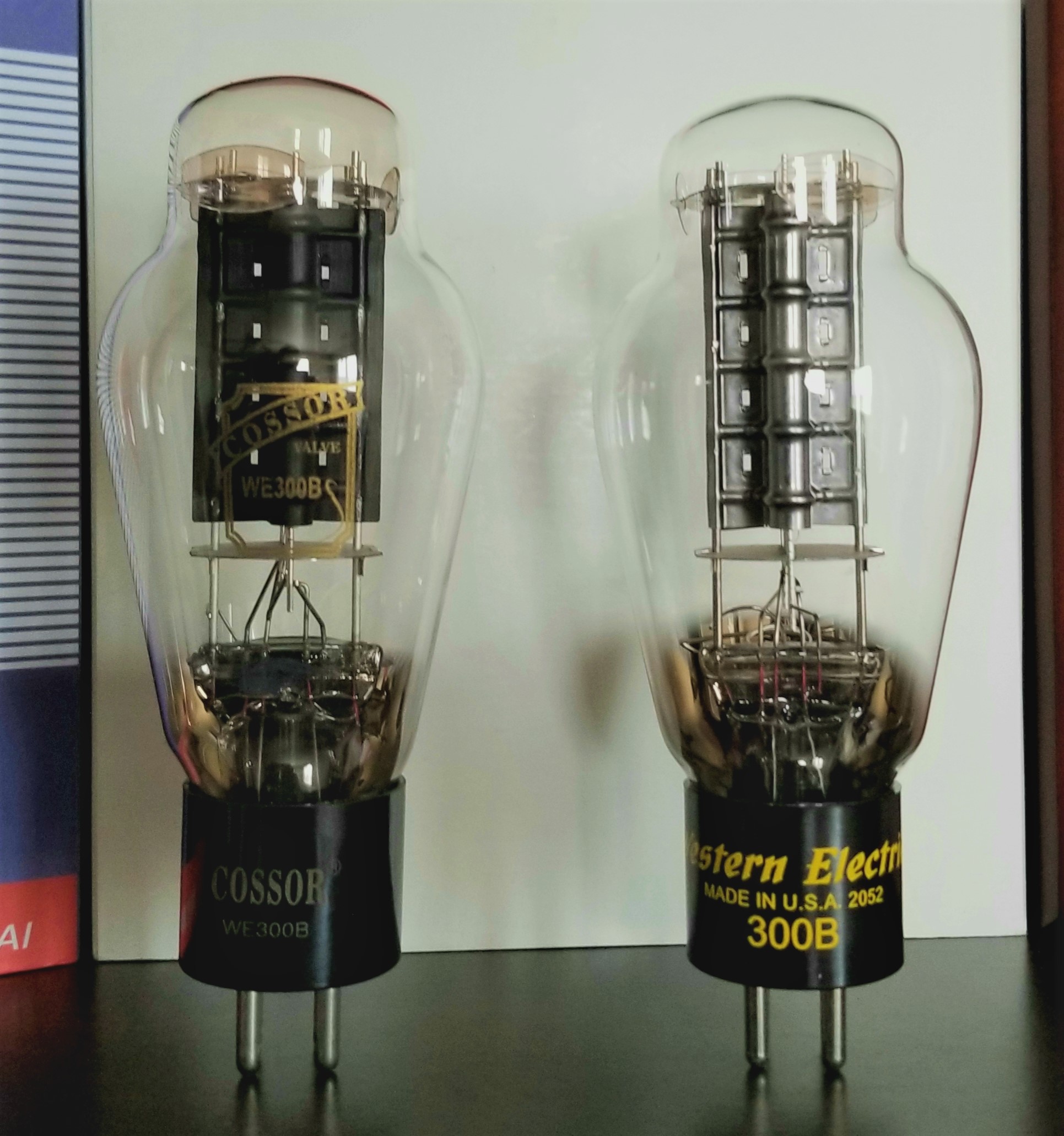 Boxes Both are more than adequate, The WE's are wood. Very nice, but you pay for that and they don't make the tubes sound better.

View of hanging filament top. Look at you "normal" 300B's. They have little coils without the posts. I think this structure makes a big difference!

I did get a T-Shirt! 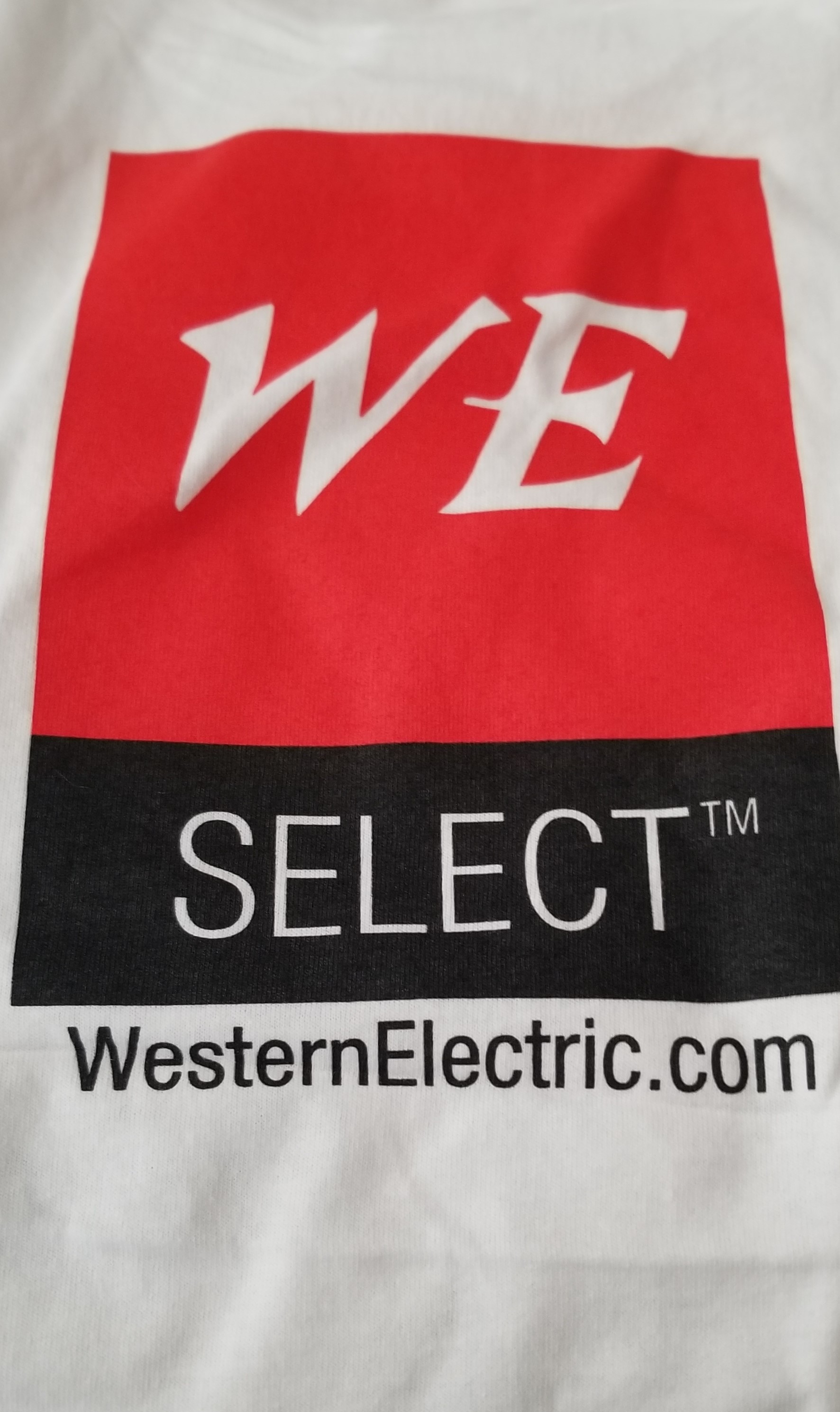 Click on the photos above to restore proper aspect ratio. The forum software is treating them poorly!!
•••
D

So who actually manufactures these tubes and where is the factory located?
•••
G

dgta said:
So who actually manufactures these tubes and where is the factory located?
Click to expand...

I have about 100 hours on the Cossor WE300B’s. The have developed into exceptionally nice sounding tubes! I have used the same Bottlehead Paramount 300B amps for over 10 years. I built them, have modified, and upgraded them. So I know how they sound. I also built the Bottlehead 300B preamp about 5 years ago. Over the years I have tried a variety of premium and mid range 300B’s from China, Russia and the Czech Republic, (Vaic, KR and JJ). I do not particularly like the sound of the Eastern European 300B tubes. They are good tubes, just not to my taste, Some say that they sound balanced from bass to extended treble. To me. they sound too “solid state! (The JJ’s not as much.) IMO they lack the full warm midrange that is the main reason to use a 300B in the first place.

The Sophia tubes sounded good, but were very unreliable making their actual cost very expensive. The Royal Princess’s sounded really good, but did not last through the warranty period, As soon as I got the replacement pair I sold them. I also tried several variations of Shuguang and Psvane over the years. I settled on the Shuguang Black Glass 50 Year Treasures in my preamp and the Gold Lion’s in the power amps. They sound really good. Warm detailed mid’s, good extension in the treble and bass. (My speakers are 1960’s EV 3 way horns that I rebuilt and modified, The bass rolls off pretty quickly just above 40Hz.), Most importantly these 300B's have proven to be extremely reliable in my system.

I now have about 100 hours on the Cossor 300B's. They sound much better than the Gold Lions and the Treasures. The mid range is warm, detailed and balanced. The tubes have great timbre, solid imaging and the soundstage is well defined, extending well behind my speakers. The bass and treble are also better than the Shuguang and Gold Lion. As would be expected, they continue to improve as they burn-in. At the price, I know of no other tube that comes close. I mostly listen to jazz, classical, blues, vocals and the occasional dino rock. The Cossors excel in providing both the intimacy of a small ensemble and the grandeur of a full symphony orchestra. They are more dynamic than the Shuguang and Gold Lion tubes, with more impact on the leading edge of transients. Males and female voices are rendered very life like, with none of the “chestiness” of the lesser tubes.

There are many tubes available that claim to be Western Electric “clones”. The Cossors are the only moderately priced 300B’s that actually do replicate the WE structure. The plates and the hanging filaments appear almost identical. The hanging filaments make a huge difference in the sound quality. If a 300B has the little filament coils above the top mica, they just are not that close to actual WE structure. I know of no other 300B with hanging filaments that come close to the Cossors in terms of price. I would say if you are looking at a $250-400 pair of 300B’s, getting the Cossors for $500 would be a wise investment, in terms of sound quality.

I also recently received a pair of the new Western Electric 300B 2019 reissues. I placed the order January of last year! It would be hard to argue that they should not be the default benchmark upon which to do new 300B comparisons. They sound even better than the Cossors, as one would expect at 3 times the price. They do sound a little drier in the mids than the Cossors, but that is gradually opening up, (at about 50 hours). The bass is tighter and the treble has an effortless detail that the Cossors do not match. But the Cossors sound really good, even in a direct comparison. Were the WE reissues not available for direct comparison, I could easliy enjoy the Cossors without any thought of missing something.

I am currently running the WE’s in the preamp and the Cossor’s in the power amps. Both pairs still need much more burn in. The bottomline? I know of no other 300B’s in $500 range that even come close. In summary, I would not consider any premium 300B replica that did not have a hanging filament design. It makes that much difference. The originals did, as well as the current Western Electric reissues. The next step up from the Cossars, at least in terms of price, would be the Psvane Acmes or the Linlai Elite E-300B, Permalloy, again these are twice the price of the Cossor 300B WE’s and not really designed to sound like the Western Electric tubes, but to compete with the Eastern European tubes.
Last edited: 2021-02-01 7:09 pm
•••
A

Victor do you have any left and can you post to England?
Is it easier now we have cast Europe adrift?
•••

Victor, when I searched for COSSOR 300B I've also found a version made by PSVane at about half the Linlai price. Do you have any information about that version?
•••

In the OP you have a COSSOR WE300B made by LinLai with the black base.

I have also seen this COSSOR 300B "made by PSVane" with a silver base.

dgta said:
So who actually manufactures these tubes and where is the factory located?
Click to expand...

WE 300B tubes are manufactured in the original (1930's) Western Electric factory in Rossville Georgia USA.
Western Electric - Maker of electron tubes and high fidelity
•••
W