Has anyone completed a woofer system with multiple woofers in dual opposed sealed configuration, but instead utilizing DSP and selectable settings to transform in between sealed and cardioid-like behavior, when preferred?

The problem with cardioids is narrow usable passband, max 2 octaves. As part of 4-way it is usable, but a dsp/delay solution means even more channels and amps.

Lots of info and commecial solutions in pro-audio, when googled "subwoofer cardioid"

Same with a true dipole woofer. 2 to 2 1/2 octaves is pretty much the useful limit. Any more that that and EQ becomes excessive and the high excursion at low frequency gives rise to IM (or Doppler) distortion. Years back I designed the CRAW that was based on two woofers with delay. The delay was achieved with a passive network. Craw woofer
•••
T

Thank you for providing that link John. This weekend I will read it, digest it, and see if it helps me understand how some woofer systems are able to provide cardioid-like at the rear the speaker, up to a higher frequency... 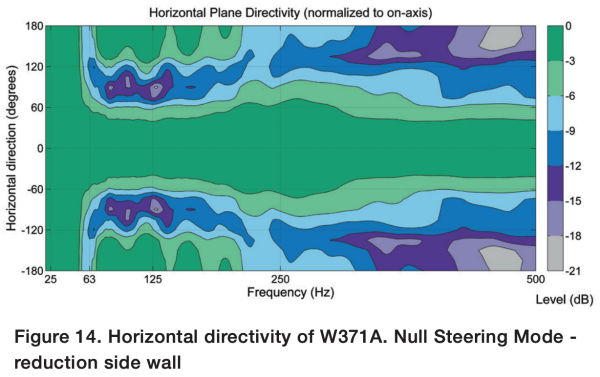 I'm interested on your application? Since high frequencies in general are not problem at the back, they beam from the driver or are effectively blocked by the baffle. This is of course related to the size of the transducer and the baffle. Use big or small depending what range you need to cardioid.

For good attenuation at rear you need both sound from the front and the back of the driver so it is long wavelengths only, that bend to the back from the front, around the baffle corner. If them back and front signal meet and are both equal other than opposite in phase they cancel, as with dipole. With delay on the back signal the null is steeded from side (dipole) to the back (cardioid) or anything in between.

I've got no math or acoustics background on this, just reasoning over wavelengths and some experimenting in simulator and with a mid woofer box.
•••
F

All the different modes in the W371A are created by changes to delay and EQ, the null steering seems the least useful to me.

The principle is pretty straight forward, the big woofer and baffle does a lot of the directivity control to 300Hz the cancellation does the rest.

There’s a few directivity plots at the end of the manual there that show a dipole-like and cardioid-like response; attenuating the rear or side response by 10dB or more.. from 50Hz upwards

^Most likely height of front and back woofers plays a role too - better to copy that too!

john k... said:
Same with a true dipole woofer. 2 to 2 1/2 octaves is pretty much the useful limit. Any more that that and EQ becomes excessive and the high excursion at low frequency gives rise to IM (or Doppler) distortion.
Click to expand...

IMHO DIYers who design and build OB and dipole systems appreciate this limitation, or they resort to using a very large baffle to prevent too much loss but then you have more of an "infinite baffle" type system.
•••

It looks like there is ~2 octaves ~400Hz - 2kHz without EQ at all? With 6db shelf and flattening the dipole peak there is 3 octaves of flat (cardioidish in this case. It is not cardioid, deepest null around 130 degrees). This is not measured but ideal 8" driver with simulated side ports and what not, tries to roughly emulate real deal. It is not too far of what you guys are saying, but isn't the dipole peak already around 2 octaves in reality as well?

^ The box and a large radiator will control dispersion above "dipole peak" in your sim, and keep DI flat and cardioid (or supercardioid).

In open baffle there will be "axial dipole null" where DI is practically zero, and above it DI gradually gets higher.

The lower end of usable response depends on distortion behaviour of the driver and spl wanted. In other words, on how much eq you can use.
•••

^ yes the response starts to narrow as per driver size (if minimal baffle), same should happen with dipole right? What is this axial null with dipole then, it happens on frequency band that should not travel to the otherside (since it is much attenuated, 3k -20dB to 90deg inspected from the perfect monopole)? Is it the diffraction interference dip like with monopole? It looks the same for sure. See attachment, right under 3kHz there is dip in axial response due to baffle edge diffraction.

Attachment GIF cycles between ideal monopole and dipole, 8" driver on 20cm x 20cm baffle which is about the driver size. They have almost identical axial response from about 350Hz to usable frequency, around the diffraction, maybe 2kHz. That is bit more than 2 octaves without EQ. With the dipole both the peak and dip are bigger. IF the 2kHz was the top, then 3 octaves would be 250Hz, where difference in axial response is like 3dB. Difference in power response seems to be roughly 10dB though. What you guys would refer here as usable bandwidth?

Another GIF adds something cardioidish and supercardioidish to the soup.

Interesting aye, it feels like the dipole and cardioid stuff is better and the boxed one is flawed in a sense since the boxed has the back wave to be dealt with or taken advantage of but the advantage is merely bass extension. On the other hand the other two utilize the back wave to cancel sound to unwanted directions and more importantly use the front wave to cancel the back wave causing problems (due to box)! DI is also flat all the usable range, in this ideal case.

All else looks the same to my eye, the stuff in "baffle step" or dipole peak and above, except the cardioid does something to the peak and diffraction dip which is probably just due to the simulation setup? I'd expect they would have pretty much peak and dip in same places as the monopole and dipole.

Is there more insight to be extracted from the GIFs? Is this too far from reality, is there something in real situation that is not here?

In which simulator cone excursion could be inspected?

All these have been generated in VituixCAD diffraction tool, except the cardioidish stuff has the filters seen in previous post trying to signal through holes on the box.

edit. latter GIF swapped, remembered the cardioidish stuff has 21x21cm baffle and the monopole and dipole 20cm 20cm. Also the gif was too fast for the eye.

Edit time over since I'm again thinking and writing at the same time I was about to change the question on first paragraph about the axial null and referring it as diffraction related interference.

Well the ~3kHz dip, being a diffraction issue with the monopole, shows that yes sound goes to the baffle edge even though it looks to be attenuated by up to 20db towards 90 degree angle. Now, there is same phenomenon (edge diffraction) with dipole happening at the same time on the back of the baffle as well. I remember reading the edge diffraction makes "phantom sound source" but opposite polarity at the edge? In which case diffraction from the back signal at the baffle back edge would be in same polarity as the diffraction from the front towards the listener? This makes the peak and dip more pronounced than with monopole. Am I on the right track?

If so, or what ever the reason, the dipole shows more severe interference to listening window and this is usually kept outside the bandwidth, dubbed usable bandwidth, right? This is about the top of usable bandwidth for monopole speakers as well, and cardioid for that matter, due to beaming, rising DI. If the ideal is smooth DI.
Last edited: 2021-12-02 10:12 pm
•••
Show hidden low quality content
You must log in or register to reply here.
Share:
Facebook Twitter Reddit Pinterest Tumblr WhatsApp Email Share Link
Top Bottom