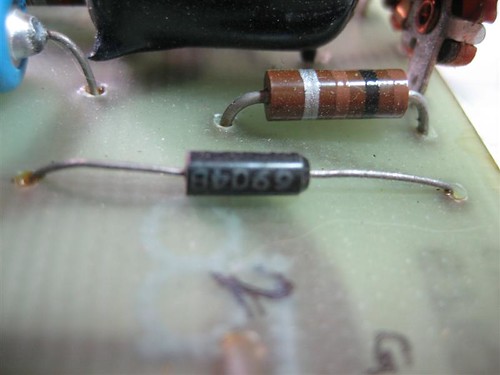 and the other side... 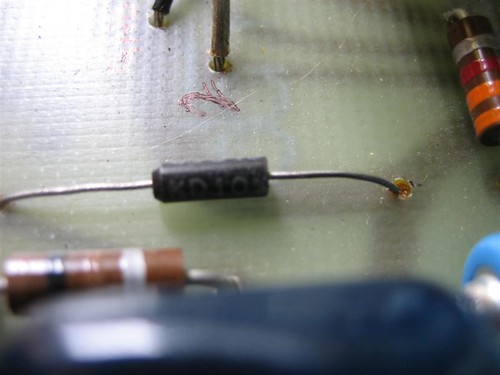 This is a 1uf capacitor (polarized) - will any electrolytic suffice as a replacement? This is the only odd-ball cap on the board, perhaps there was a reason it was chosen.

Oh, I have worked on my share of Rhodes pianos in my years.
•••
C

Good to know, I may have to bug you about this preamp down the line!

As you can see, the old light bulb resistors (150ohm 2W) charred the board at some point. I just received this unit last week (I've been on the hunt for well over a year). I cleaned up the old flux and gunk off the traces, powered it up with a few batteries and the bulbs are flashing away nicely. Besides re-capping, I'm going to up the 150ohm resistors to 5W (even the 2W's get hot). I'm also adding a double pole switch to have an option for slowing the vibrato speed - 10uf caps in parallel with the original 5uf caps to get a nice slow pan.

Beyond that, my only concern thus far is with units that exhibit the 'thumping' issues with the vibrato. Did you ever encounter that? Something about the transistor's wave-form being too steep on attack. I only know of one solution to this, which is a mod. I'm trying to figure out why this thumping happens from the get-go, and why some boards suffer and others don't. More to the point, if I come across this problem I'd like to solve it at the route of the problem, and not tack on a band-aid. Any advice?
•••
E

I often slow trem speeds, I find on most that the range is from not slow enough to 10 times too fast, when what I want is from a slow sexy throb up to a reasonable speed. In yours, is the all the way fast a useful speed? Or is it over the top. You might find rather than stuffing a switch into it, maybe just a slow down in general. On guitar amps, I can cut the speed in half, and the top speed still remains too fast for use.

WHy does something occur on one unit and not the next? I'd say probably component tolerances.

I don't specifically recall thumping in these, but I see if enough in trems in general. It usually means the LFO signal is too large for whatever it is doing. I don't know about rise time, maybe, but I'd think between the 50uf caps at each, and the natural delay of a lamp filament coming up to temp, the speed edge of the circuit ought to be dulled enough. Also if that 5uf cap in the emitter follower serving those photoresistors is leaky, the trem winds up slinging DC around and that could contribute.
•••
C

"slow sexy throb" is a great way to describe it. and yes, almost always the fastest speed is way to fast. But I find that I can't find a capacitance value which results in both an acceptable fast and slow speed. Right now I've got 15.6uf (5.6+10), that range seems to be about 80 bpm up to 250bpm. I really like the slow end but I can also see it being a nice feature to have it speed up a bit more. I should note that I'm building this into a self-contained housing, so it could be nice to have the option since a variety of input sources can be used with it. I'll keep you posted.
•••
C

Enzo, I have shielded wires for running my input and output lines - do I ground them at both ends? The lines would be running from the circuit board to the 1/4" jacks (plastic type that does not ground to chassis). Should I consider a ground-lift switch?
•••
Show hidden low quality content
You must log in or register to reply here.
Share:
Facebook Twitter Reddit Pinterest Tumblr WhatsApp Email Share Link
Top Bottom