Joined 2014
Paid Member
I have been used Burson Supreme Sound discrete opamps in previous projects. I have had success with both the single and dual version, V4. I found them to have a clean and pleasant sound quality.

I recently completed a preamp based on Rod Elliot's P88 PCB. I also used ESP's phono section for the MM input. I was very pleased with the performance of this preamp.

In addition to the ESP phono section, I included an HQMC MC phono section designed by Hypnotoad on AudioKarma. This uses AD797 opamps for the first stage. The second stage seems to respond to different opamps. There is a lot written on AK about the characteristics of the various choices. I have built 3 or 4 of the HQMC previously and settled on the LME49990 opamp. The sound quality with that pairing (AD797/LME49990) is a nice blend of detail with smoothness. For this test I swapped the LME49990 with the Burson V6 Classic(retained the AD797 in first stage). I was pleased with the results. The V6 was very smooth but showed a bit more detail than the LME49990. The Burson are a bit less harsh. It would be interesting to see how the circuit performed with Bursons in both stages. While the difference is not "night & day" it's an easy decision to replace the LME49990. The Burson are very reasonably priced and well made and they do offer sound improvement in my opinion. Unless you have a very shallow enclosure, they will fit.

Just for fun, I wanted to compare the V4 and V6. I believe the V6 offers a bit more detail retrieval or presentation than the V4. It's not enough that I would upgrade V4 to V6 but the V6 is better to me. I hope to test the V6 Vivid at some point in the future.

The first photo shows the HQMC with the Bursons. The second shows the Lme49990.

Joined 2018
Nice!
On my end, I tested the V6 Vivid in my WHAMMY headphone amplifier (nested voltage gain stage), and it gave clear improvements over the other Op Amps tested (to my ears).
Next step will be to measure the various Op Amps and compare.
I think I'll test more Op Amps in a second benchmark session, and I am open to suggestions. 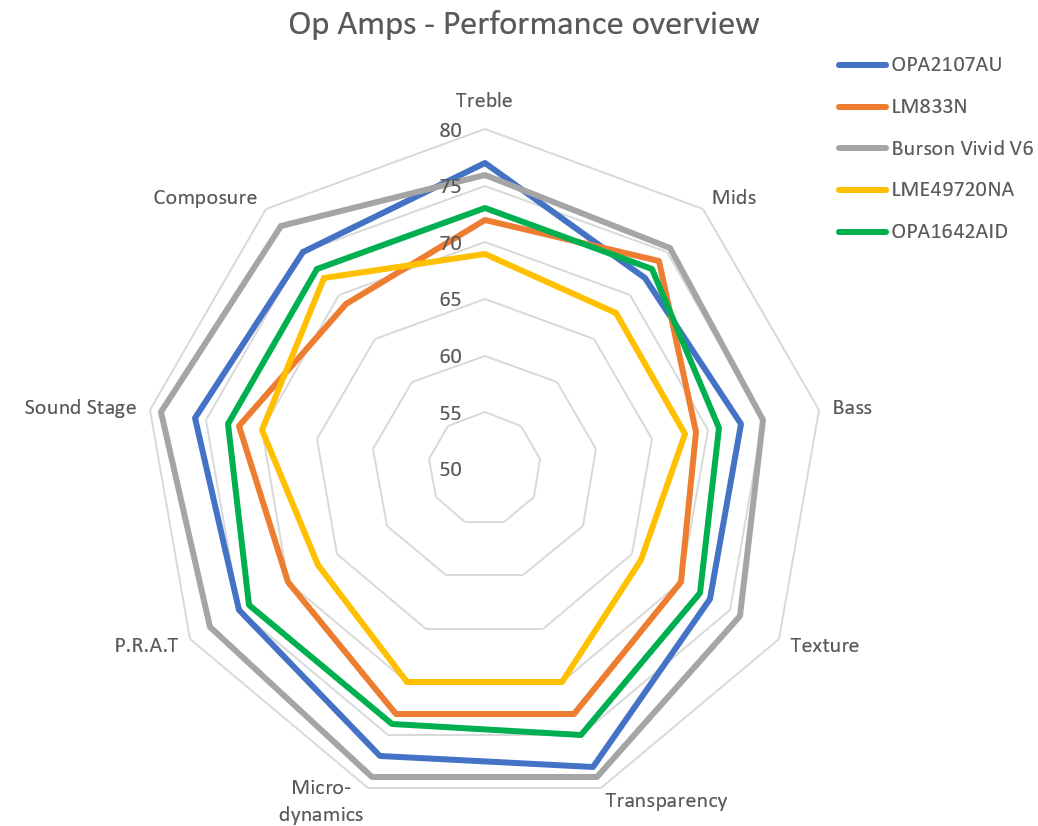 See below for more details:

Joined 2008
So just a bunch of subjective sighted testing? And PRAT is BS made up by some ignorant "audiophool" reviewer. Analogue Electronic circuits dont effect rythme or timing in any way. And what is texture and how does an opamp change it?
•••
M

Joined 2018
Yes, sighted testing, but proper blind testing will come up in coming week(s) (a colleague will swap without telling me), and based on what I heard, I am confident that I'll be able to identify directly at least 3 of them on the first 2 songs.

I recognize that there is some overlap in between the criteria, and was pondering to remove 1. Actually, not that simple. Here's MY view:

- Micro Dynamics focuses on the mid-low level and fast details.

- Texture, which partly overlaps with micro dynamics, but with the aspect that these small details should be consistent whatever the level of the signal played and its crest factor, so that texture remains credible at all times credible. It's not the same between "I can heard details that pop up" (micro dynamics), and "those details are represented under a tangible form". A great instrument to test this is acoustic guitar, and especially trumpet, where all the harmonics should retain a coherent relation to the fundamental instead of having high frequency sprinkled around.

- P.R.A.T is, to me, mostly correlated with high micro-dynamics, but mostly for highest signals: when Bass have great impact and micro dynamics / texture is good, all beats in a song will kick with strength and with their respective tonality/spectral content, which really helps to communicate the musicality and pace of the beat...

cbdb said:
So just a bunch of subjective sighted testing? And PRAT is BS made up by some ignorant "audiophool" reviewer. Analogue Electronic circuits dont effect rythme or timing in any way. And what is texture and how does an opamp change it?
Click to expand...

-> Well, what about an all pass filter? This type of filterd will drastically change the phase of the signal, while keeping THD and frequency response identical. Its impact is clearly audible and measurable. This kind of phase shift means that not all frequencies will reach your ear at the same time, which will be changing the timing of some beats (whether it was mids or high frequency centric for example), and also change the spectral content of the beat (isntead of being a wideband impact, it'll be a high frequency impact followed by a later kick in the lows.

At this point I think you are already smashing your keyboard, so I'll stop here .
I respect your views anyway, and just present things as I hear them. I do not pretend being a hardware expert.


For more details, see my blog in signature.

Joined 2018
Thanks to Coronavirus, blind test is on hold for now, but luckily I could do some APX555 measurements of various Op Amps including Burson V6 vivid at work, see on diyaudio link below or in my signature:
"WHAMMY" Pass DIY headphone amp guide
•••
M

Joined 2008
Op amps dont change phase in the pass band so theres no way they can change timing or rhythm. Even if they did they might smear the attacks but they will not change any timing. Recording consoles would not have filters or EQs if they effected timing (rythym).
•••
M

Joined 2018
My phase measurement indeed indicate that it's basically identical across all op amps.
•••

Or following the precedent of Samuel Groner, for that matter. IMHO replicating his tests does not require an AP analyzer, it just makes it easier - any other decent measurement setup would also do.

I would add a CMRR(f) test to the list, as this could shed some light on why some opamps' common-mode distortion performance degrades rather badly at high frequencies.

Also, testing of input current noise as a function of both balanced and unbalanced impedances at either input. (While many parts will show identical performance e.g. with 5k + 5k and 10k + 0, some older parts with input bias current cancellation suffer badly in the unbalanced case - their cancellation currents on either inputs show correlated noise that will cancel out in the case of balanced impedances but won't with the unbalance. This is why e.g. an LT1115 is a lousy choice for an MM phono pre - its high-frequency noise in this application exceeds that of standard types like 5534A, NJM2068, 5532, LM833, MC33078 or NJM4580 by up to 10 dB.)
•••
Show hidden low quality content
You must log in or register to reply here.
Share:
Facebook Twitter Reddit Pinterest Tumblr WhatsApp Email Share Link
Top Bottom