Joined 2002
tech-diy.com
Hat tip to Peter Demchenko for his article in EDN -- I simmed it with 2 different BF devices.


An externally hosted image should be here but it was not working when we last tested it.

An externally hosted image should be here but it was not working when we last tested it.


An externally hosted image should be here but it was not working when we last tested it.

When that article was written I still had no gray hairs and only 2 kids! I couldn't have afforded a MC cartridge at the time. The beauty of the article was, however, was in the delightful MC pre-pre design using low cost components. I am wondering if you've given thought to updating it.


An externally hosted image should be here but it was not working when we last tested it.
•••
3

Joined 2012
No, as I dont have a MC to try it with any more. How does it SIM out? It was quiet -in that I heard no hiss/noise. Couldnt measure it at the time. I can now. Try it.
I cooked that circuit up in my own little brain on my own while working at LLNL. I recall that John Curl saw it and called me to talk about it. Geeeze, you guys have great memories about these things.

Joined 2012
And, all along I thought no one was paying attention so I stopped writting until recently when I am near retirement.

Joined 2010
Prof Marshall W Leach published the same circuit sans emitter resistors and current mirror in 1978 in the Audio Magazine and called it the Common Base Head Amp or some such. The then editor advised him to call it a pre amp and suggested the 2N4401/4403 transistors which have very much lower noise than the 2N5210/5087.

Joined 2012
It is not the same circuit at all.... only thing in common is the common-base input. There is no overall nfb to lower distortion and to lower the input Z further. The input Z is very low and damps the cartridge was the main point to my design. M.Leaches circuit doesnt have these features.

Joined 2010
Perhaps I should have said 'similar'. My focus is on the push-pull common base input which I think has a rare beauty and elegance so credit to you both for recognising this. However I suspect we are hijacking this thread, apologies.
•••
3

Joined 2012
M.Leach MC designs of which there were at least 3 all required cap coupling, also.
I got the input idea from a tube designer (David Manley) who showed me his design he was working on for my comment/input.... input was to the cathode in his MC circuit. I also wanted to lower thd with neg feb and to lower the input Z. Plus be all direct coupled. I think the design you are referring to is below: 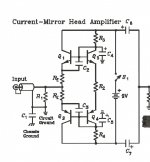 This seems to be the one you made? But the other one M.Leach published was a common base input. But again at that time/era everyone still required cap coupled circuits. I put a compl push-pull on the output and feed the fb signal back to the input.... later a line level variation of mine was published which pre-dated the current-mode fb IC. Mine has in principle zero dc volts on output. Later, i invented the idea of dc servo for drift/offset. 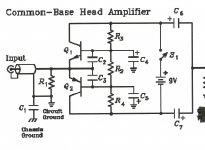 In any case matching compliments is always a good idea.

Here is my take on Demchenko's transistor matcher. I needed something "quick & dirty" to match the outputs for my amplifier build: http://www.diyaudio.com/forums/solid-state/141744-trust-most-delicious-dx-amplifier-10.html#post3535699

The circuit is turned upside down so that gnd becomes reference for current measurements across the 100ohm resistors. A switch is added across R5 for base current selection. And diodes are installed in the main current paths so that the sensitivity for the red and green led's is increased. Please note that D1 and D3 are not installed but replaced by a short. Tho whole thing is fed by a lab supply, I used 15v when matching output transistors and drivers, and 8-10v for small signal transistors.

This matcher works rather well, the red and green led's indicate which side is "stronger" and a voltmeter across M+ and M- tell the difference between the two. A measurement between GND and M+ or M- will indicate the actual current through the transistors.

I may build a better one that displays hfe and vbe directly in the future, but this will do for now.....

Joined 2012
BTW -- Linear Audio is going to publish an update to my MC pre-preamp topology in which I used bipolars but the update will use all jFET's instead. This is the same author which used my phono and line stage design/topology - remade it into all jFET version. So look for it. Should be great. jFET version will be done by E. Borbely.