I just spent a while re-building 4 sets of interface for my 2+2's.
I went through all the mods I've seen here, the C-mod, a high voltage 0.22uf across the zener string, different values of final output resistor, from 100M to 500M.
The original design was just about spot on, all the latest "mods" dont really do much, give it a bit more tizzle if anything, which some will interpret as detail.
Even the original design with the 220uF crossover cap is pretty good, ( replacing the 220uF with a new piece brings it back to life, maybe the tales of it being necessary to replace with polyprop cap aren't exactly true)
A refurbished interface is about as good as you will get, whether its the old 220Uf design or the C-mod with 47uF polyprop.

BUT, there is a way to get a drastic improvement in clarity, open-ness, bass tightness and all round musicality, although in theory it shouldn't work.
Separating the inputs to bass and HF transformers, ie, providing two sets of speaker connectors and using two sets of amps, one for bass transformer and one for HF transformer, really makes the Acoustat a superb loudspeaker (which it already is, but now its even better.)

Now I know that the two transformers get blended at the HV section feeding the panels, and I agree that bi-amping shouldn't make any difference, but it surely does, and I just cant listen to the single amped version now.

I'm using very powerful amps, so I dont think its just a matter of doubling up with power, maybe it is, but whatever, if you get a chance to try this its very worthwhile.

But having said that, I have enormous respect for the original design and dont want to infer that there is anything wrong with it.

For me, bi-amping is the ultimate way to listen to Acoustats, despite my brain saying it shouldn't be so.
•••
T

Yes I remember you saying it wasn't much of a gain for you, which is opposite of what I found, although I'm somewhat perplexed how it can make such a difference.
I'm big on sound-staging, imaging, all the 3D stuff , and it makes a big difference to that.
Yes it's a job for experienced acoustatophiles
•••
T

DeltaStar said:
Supra? Can you bi-amp the 2+2's with the stock interfaces? if so how? Like to try it myself. thanks
Click to expand...

No, you have to modify the interface.
One thing i didnt mention is that by using two amps, and adjusting level of each amp, you can change the balance of bass and treble, thus making subtle or significant changes of tone.
I have the tone just a tad warmer than the single interface sound , to suitmy room and taste.
•••
T

Yeah i like the "old" interface with the 220uf too, it has a warmth i like, but I havent got it in a biamped interface yet, will give it a shot soon.
•••
S

With the OLD 121 interface (with 220uF electro) modified to bi-ampable, and after extensive listening, I prefer the C mod/47uF polyprop configuration. There's a lack of texture and macro-dynamics with the electrolytic version, although its still damn nice.
••• 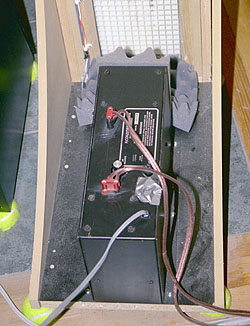 I didnt think i would have been the first! 2 naims, i bet that sounds nice.
•••
T

yeah the type of cap is audible, a Mundorf Supreme, silver in oil would be nice but expensive.
What do you think about the Monster cable, I have left it in on a couple of my interfaces, although just on bass transformer. Hasn't gone "green" like I've seen on others.
•••
T

Here as with Spectra 11 setup... see how there two center taps are move above earth-ground.. with the 10meg res......
I just do the same thing with the 121 high an low trans centaps......right at the bias board...
Leting the tran center taps talk to each others ..an not just be shorted out.... give more of that 3D...an better tone...
it can be put right back if you don't like the sound...thanks