A newb here... I've been lurking and searching my around for a bit.

In the past, I managed to build a TL with some Vifa TG9FD with actual success. I was a bit skeptical with my woodworking and math skills but managed to get through the project and am quite happy with the results.

At first I was thinking of something like a PAP design but I think the optimization are beyond my scope, space and budget at this point...

I was thinking of building two H-frames, one for the 12CX/ASD1001 and one for the Alpha 15a's (w/ passive filter)... stack them and voila(?)... I couldn't find any info about putting a tweeter/coax into a H-frame so I was unsure how or if I should proceed. I will most likely also run into space issues...

Then I started looking into a TL design. When I built the TG9FD pair the 1/4 wave length was short enough for me to build a box that was resonable in size (basically a 'pensil').

A TL for a 47Hz speaker is really long.... I used HiFi Loudspeaker Design to get a rough idea for this driver but am unsure of options for orientation and port placement. The drawing that the calculator shows (from what I can tell) a folded TQWT design, but with the port on top. My issue/concern is I would not want the port on top. I'm not sure if the port could be ran out the back, or if it could be diverted to the front? I'm guessing the drawing is a reference? or does the port have to go out the top or bottom (if I flip it upsidedown) of this design?

I've been trying to remember all the details and find my notes from my TG9FD build to give me some clues but we renovated and its been a couple of years (yes these parts have been sitting in boxes for a couple of years) I can't find a thing....

Any help of suggestions would be greatly appreciated...!

Here are two Karlsnn based solutions for Beta 12CX. The Karlsonator (for 12 inch speakers) is tuned ~37 Hz. The other cabinet which is traditional style, about a half octave higher - and a higher low frequency cutoff. The traditional style might exhibit more "hit". Beta 12CX can be used in Karlson's K12 but its relatively weak motor would be happier with a bit more volume, so I suggest the X15 size below.

If you're not familiar with the Karlson K12 version introduced ~1956 and published in the July 1958 issue of Popular Mechanics, there are two rear "shelf" boards which also act as back panel braces. 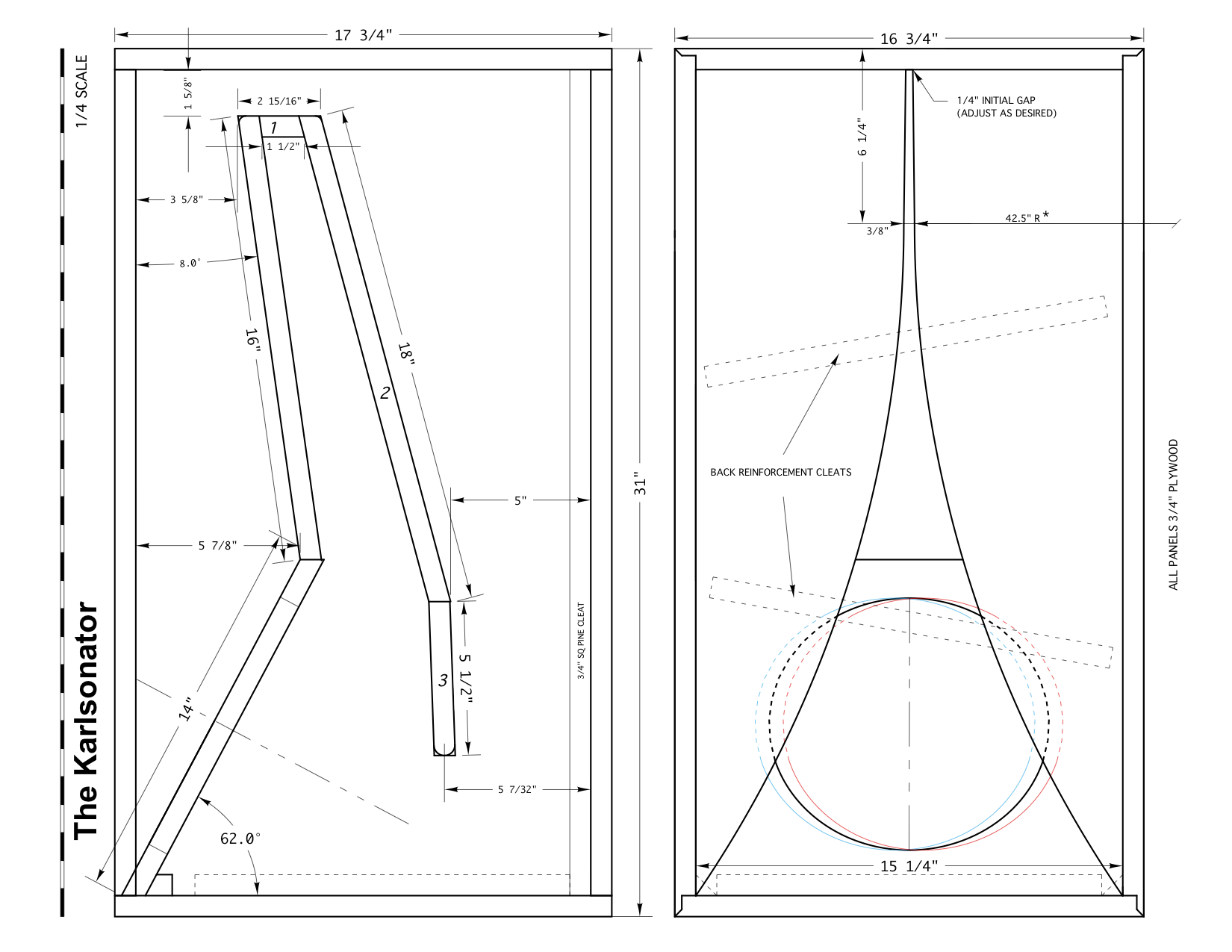 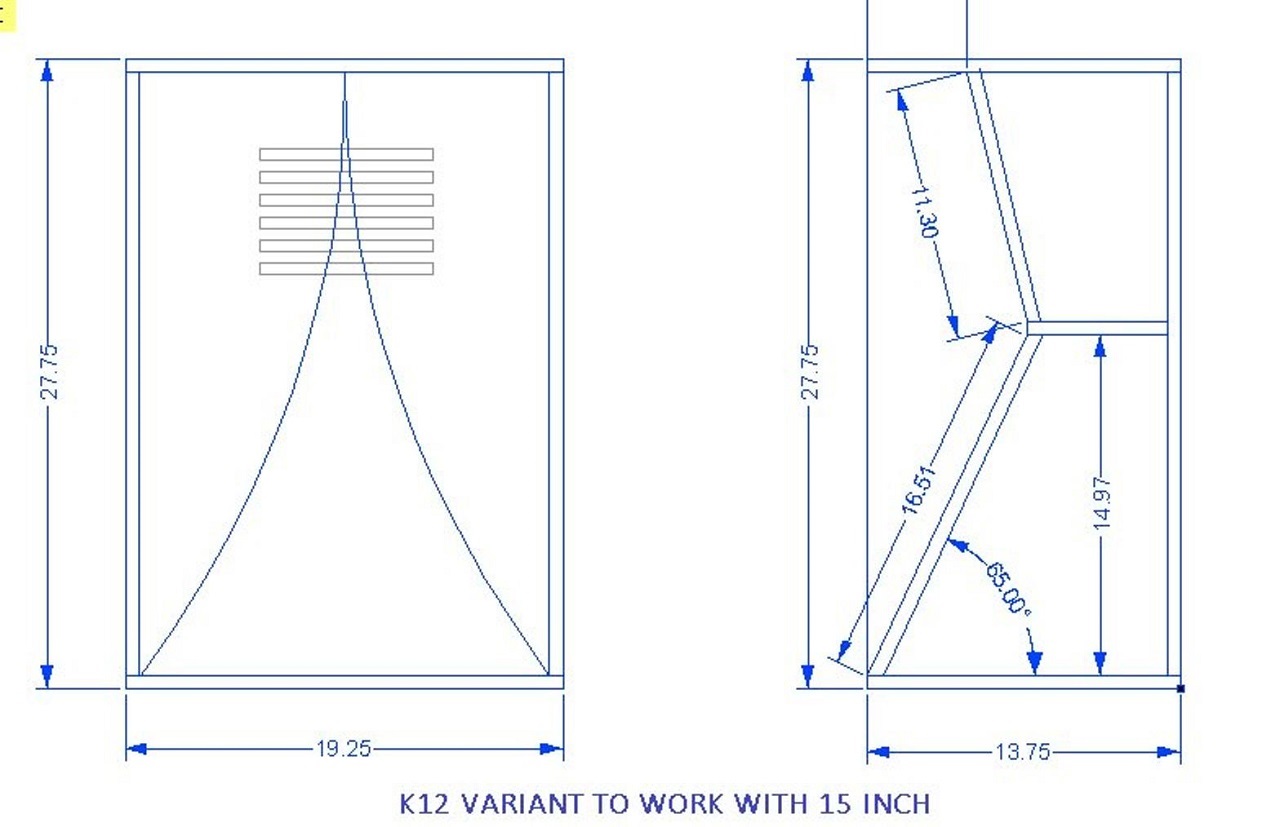 Here's a pair of Karlson K12 showing the split rear shelf. Alternately a short depth rear shelf
could be made and adjust its gap to the back panel for best transient response with percussion
tracks. Gap area could range from 0.2X Sd to 0.4X Sd

I'm not sure if I would use Eminence's CX crossover values as the lowpass may have some baffle step
correction. Their old "3K5" network might be more suitable. 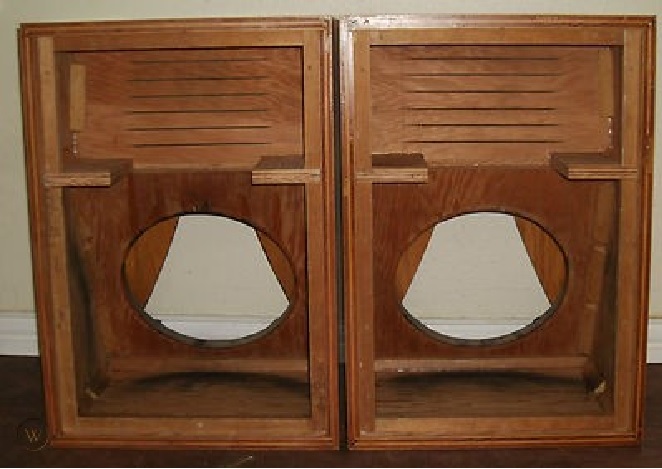 Here's a drawing of Karlson's 1960's K12 offered as a kit and available with a blank port board.

It had a full width rear shelf and as you can see, the gap between the rear shelf and back panel
was pretty small. I would start with a larger gap then stack on pieces to adjust transient response. 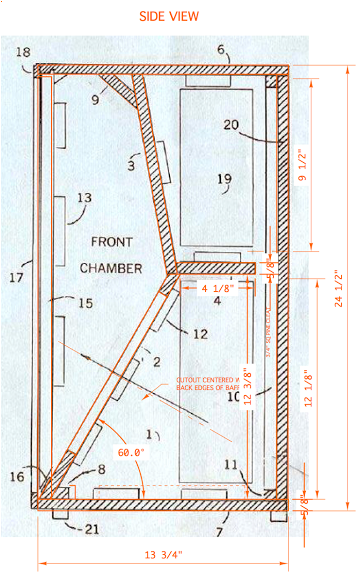 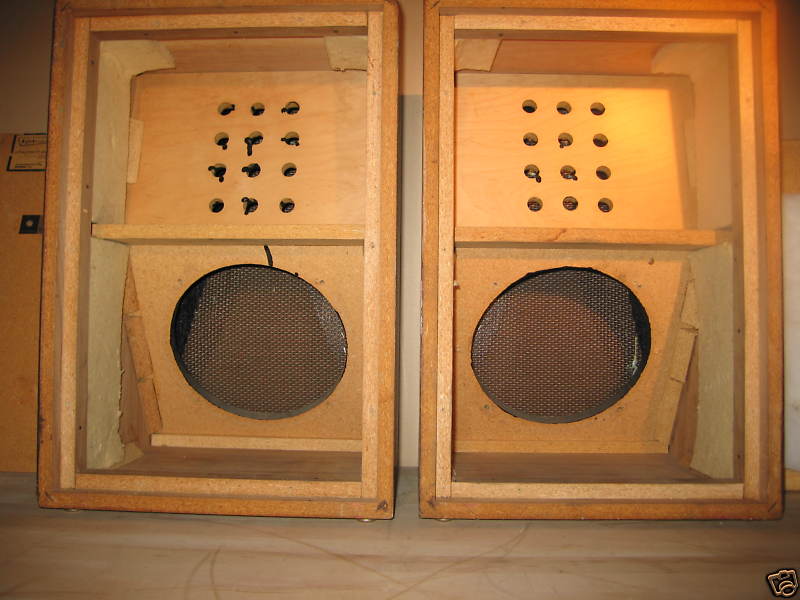 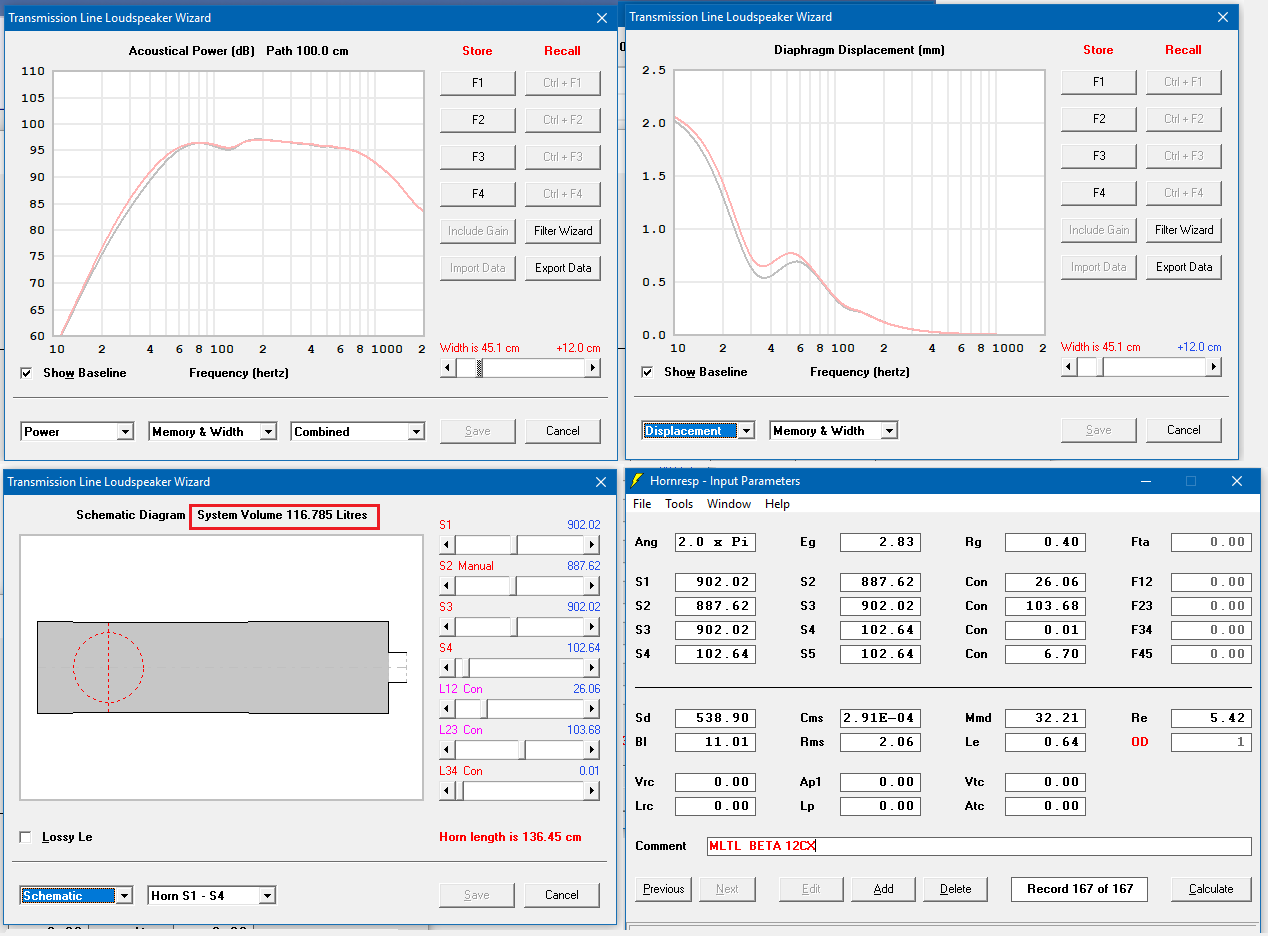 Maybe you can get some inspiration in my project here: Eminence Beta 12 CX + Selenium D210Ti MLTL (huge)
•••
T

Thank you so much for the suggestions!

I looked at the Karlsonator design before with the Vifa but felt a bit overwhelmed by the details of the build. I think I could map it out ok... not sure my skills with the tools are all that precise... (thus my preference for straight cuts... ;P)

I have read about ports and understand the placement and size affect the overall result... If I were to design a box for the 12CX not unlike a larger version of a 'pensil' (which I like because of the simple port) would this give similar results?

I've included two images of TQWTs but with ports in different locations... ideally, I would like to try for something like the second image where the port is out front....

As a comparison, from what I figured out the folded TQWT would be ~32".. approximately 20" in height difference ...

the bottom cabinet is a nice height - but is for a 6.5" frame driver so will have to see what that does somewhat scaled / made wider to keep height manageable.

pelanj -with Karlson asymmetric projector/klam, some coax can be converted to K-tube duty, beveling the throat end of the tube and jamming/gluing it into the coax's horn. With small klam and car coaxial having a dome tweeter mounted on a bracket, the K-tube can be glued over the dome tweeter. 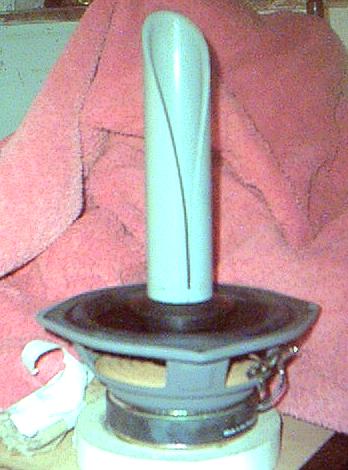 I once had Beta12cx in an X15 Karlson clone (roughly 2 cubic foot rear chamber, 1 cubic foot front chamber) - know it could not go deep but one day was playing a Taiko
CD with really big drum and probably had the gain up pretty high with 200W amplifier - when that drum was hit , the impact startled me and expected the cone to fly out or rip - it only moved about 1/4" peak to peak. Some of that may had been the higher tuning pushing the lower peak up where not a lot of power was absorbed - some from the damping from the front chamber (???)
Last edited: 2020-01-27 10:21 pm
•••
T

Thank you Pelang and Freddi, once again.

Freddi - do you think the first pic I posted could be flipped and an extension added so the port goes to the front?

don't know but don't think so - more likely the driver will be some ways down the line from the beginning. Ping and ask GM to cook you up a quick TQWT with hornresp for Beta 12cx - its parameters determine the sweet spot.

I may have used another spec as the vent area below ~780 sq.cm - ballpark anyhow
as barely affects the sim 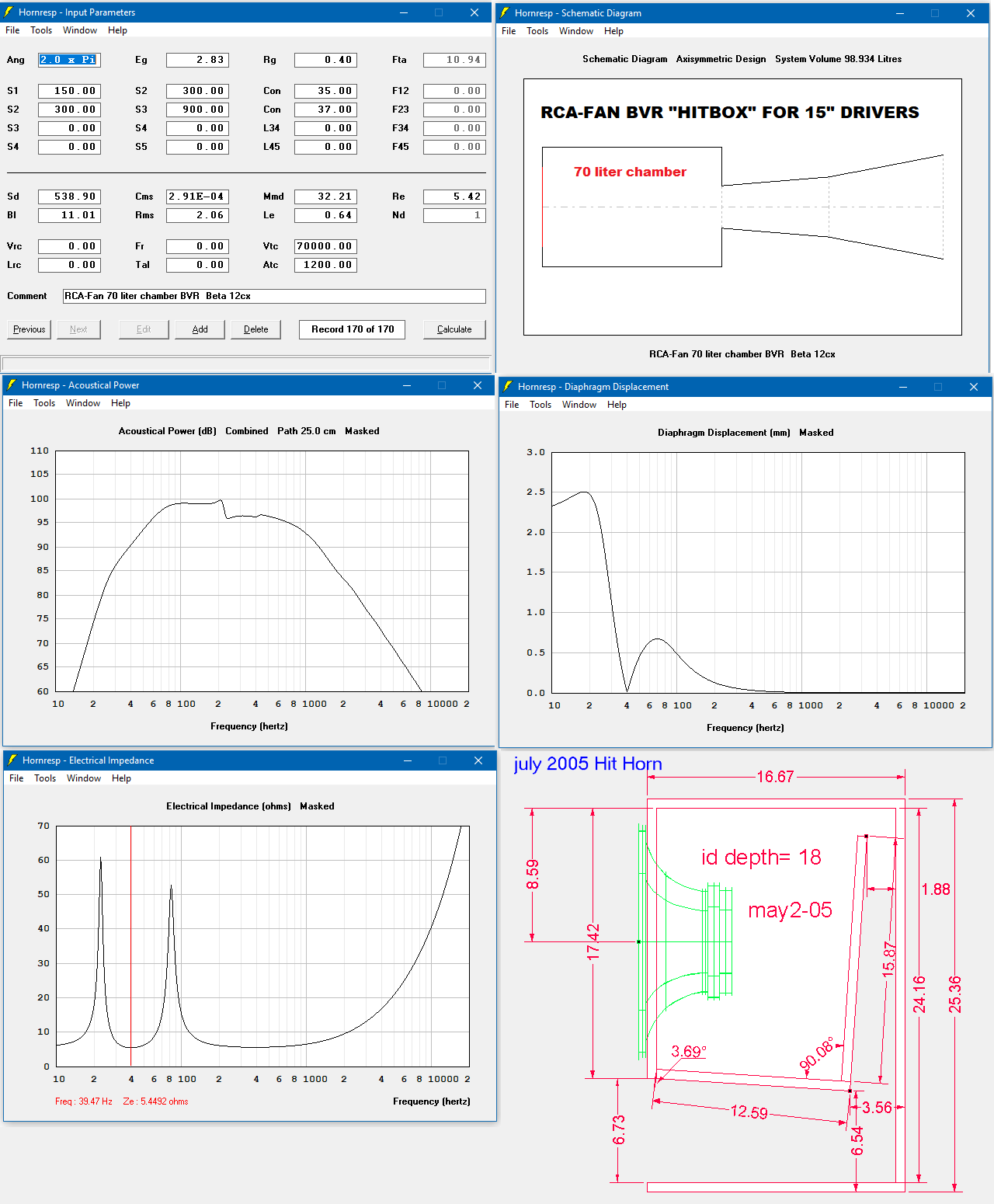 Thanks again for the suggestions... I went back and started digging a bit around the Karlsonator again...

If I understand it correctly, the X15 (pic attached for clarification) can tune down to 37Hz with that little cu.ft.? I have to admit as much as I like an even tuning... I'm a bit of a basshead (I have been into earbuds for the last while and each pair has different strengths/tuning. I gravitate towards models that can put out a decent amount of low-end)...

Do you know what size the ports would be?

Also, would you happen to have a graph/sim of this configuration?

*edit for further clarification*
I think I found some of your old posts on another site and in one post you had attached an image of old Stan White advertisements. I love that aesthetic. I would love to try to build a pair with a contemporary twist... I wonder how much the legs would affect the sound/bass?