Joined 2013
Picked up a not-working Belles pre-amp. Seller said one channel was out. Never heard of this brand before but it was stated to be class A so I figured what the heck.

Did a quick search on the internet and there isn't much information on this preamp but people seemed to like the amps for the most part. Since only one channel was stated to be non-working I figured I could at least compare the two and work my way to the problem.

Here are some pics of the unit initially 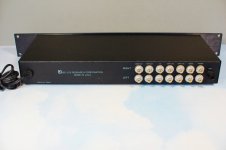 Not bad looking. It is pretty compact in form reminding me of the Acurus preamp I have.

Well on power up I saw no DC on the outputs that would scare me from plugging it into the test bench. Unsurprisingly, one channel did not work. Didn't take too long before the unit was opened up and the guts exposed.

Pretty typical design with the phono stage on the left and the line stage on the right. Power supply is in the back away from everything else.

Two things I noticed right away were the crappy flat cables connecting everything. I thought for sure I would find one broken somewhere but that ended up not being the case. Most of these will have to go at some point though.

The second was the dreaded repair job. I could see several of the capacitors and possible a couple resistors had been changed. Actually didn't look terrible on top and nothing appeared to be modified.

Next step was to check the power supply. This appeared to check out with around +/- 20V. Moved along to the line stage and BINGO, the power rail to one channel was to looking so good.

At this point I was thinking a diode or transistor had kicked the bucket so I moved on to removing the circuit board. Actually came out pretty easy. In the process, I took the time to clean all the switches which was pretty straightforward.

When the board came out and upon flipping it over, you could tell the repair job of replacing capacitors wasn't so meticulous. There were solder specs all over and some questionable joints. On further inspection I noticed some globs of solder that had joined traces. Not good at all.

Cleaned up some suspect joints and removed excess solder. Put the unit back together and we had power to each channel. Lo and behold we now have music in both channels.

This had to be one of the easiest problem-solve repairs to date. Don't know the history behind the repairs or if it worked after but I do know it works now.

Not a bad sounding preamp. No quite an Acurus RL-11 but I am sure it can sing a little better after a make-over. Plan now is to replace all electrolytics, signal resistors as needed, and maybe some film caps (output coupled from what I can tell). Also want to replace some of the cable wire, and if I have a couple extra RCA inputs, I'll do those too.

Decided to share this here cause I couldn't find too much information on the unit and I thought maybe someone who had some experience with these might shed some light on the unit. Or, maybe there is someone out there with one that doesn't work and this may be of some help.

Will update as I move along. Also have a non-working Belles One that I haven't touched that I will get around to at some point
•••
M 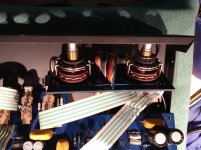 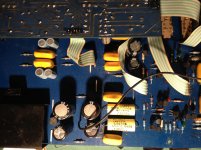 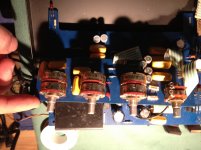 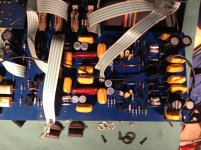