A low power 5E3 made its way back home in need of repairs. I built it as a home friendly volume machine but the user has been using it when he did not want to drag his Peavey classic 30 out to house concerts. It is a little under powered for the application. So just for kicks I am going to build an amp that is a hair bigger in size but rather than using 6AK6's for the output tubes putting out 2-4W I am thinking of using 6V6's or maybe EL84's. And instead of a 10" speaker out of a 60's console stereo a 10" Veteran Warehouse Guitar Speaker should take the added power.

Not one to turn up my nose to silicon devices, the rectifier will be solid state, the phase inverter will be Mosfet powered as well as the source follower before the tone stack. So for now the plan is one half of a 12AX7, the source follower, tone stack, the other half of the 12AX7, fixed biased Mosfet for the Cathodyne PI, then the 6V6's. So vacuum tubes where gain is needed, Mosfets where using a tube is not doing all that much soundwise.

Here is where it gets messy. I had a pair of transformers out of a console radio that used 6AQ5's. I decided to use a stainless steel chassis I built at work, I normally do not like SS as it is hard to drill and cut. No longer being one that is gainfully employed, I only have the tools I had at home to machine the chassis to hold the parts. I decided the fastest way to do the power transformer cutout was to dimple the SS using a deck screw and a hammer. Once done I used a chisel and cut the section out. 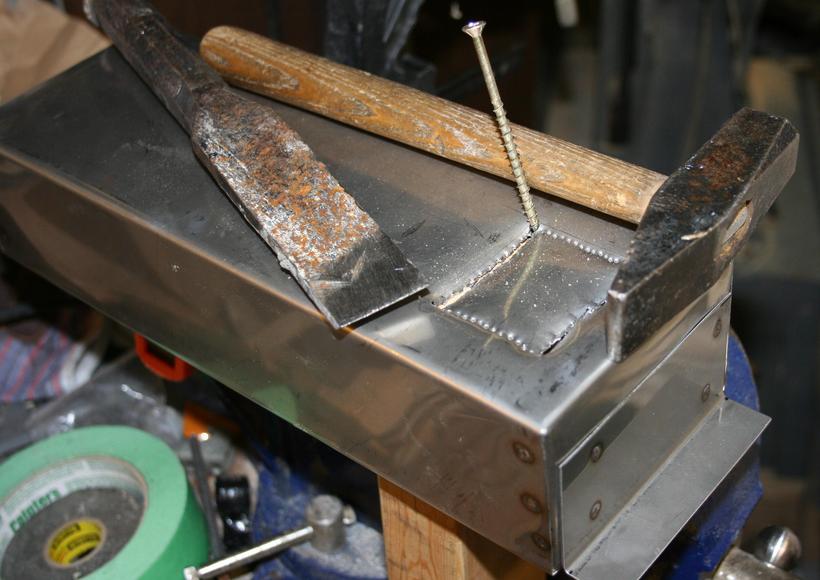 Some hammer and file work managed to do an acceptable job of getting a home for the transformer. Then I decided to measure the winding resistance and voltage in order to decide how to proceed next. I ended up confused as the windings had hardly any resistance. Determined which should be the line, I hooked it up and measured the voltage. On the center tapped winding I got 20V - 20V and the other winding about a volt. What the heck? The only think I could figure out is I mistook this for the 6AQ5 power transformer, they both had a copper flux winding on one side of the core.

So scrounge through the transformers and chassis I have laying around, found one small enough that it will fit on the chassis and will not weigh too much. It is larger than the other transformer, after weighing options I decided to use one of the holes in the chassis and open up the cutout for the new transformer and drill two more holes. After some more file work I had it sitting in the chassis. Will not win a beauty contest but it is functional. While I was at it I cut a fuse holder hole and one for the power cord connector. And I only broke one drill bit. 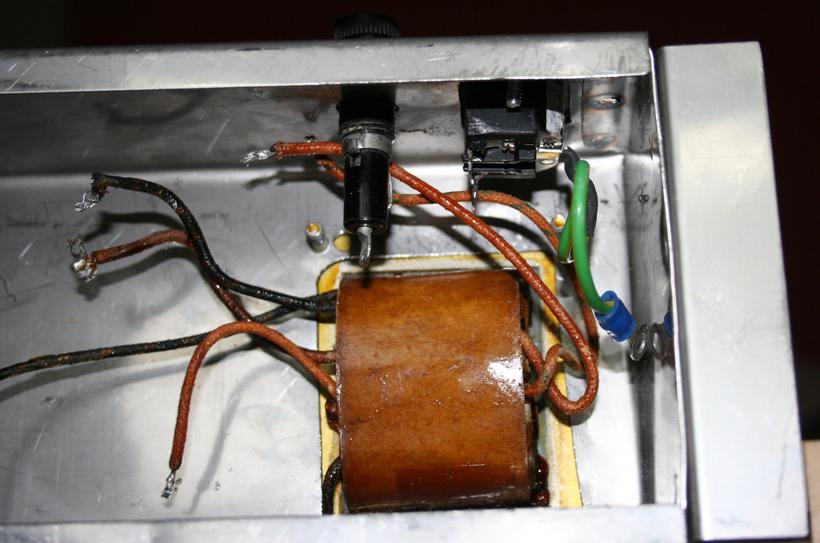 I appreciate the hard work done with such basic tools
•••
P

I try to put it out of my mind as soon as I can. A tentative Schematic, still have to decide on the tubes. He has a EL84 amp so if it used the same tubes then he does not need different spares.

You need a cap between the second volume control and the PI fet, otherwise it's bias varies with the volume setting.
•••
P

Tubelab_com said:
You need a cap between the second volume control and the PI fet, otherwise it's bias varies with the volume setting.
Click to expand...

Oops, just threw the volume control in there at the last moment, I'll add the cap.
•••
P

Got the holes for the tube sockets and the pots done. Sacrificed a couple of more drill bits. I like working with aluminum better. 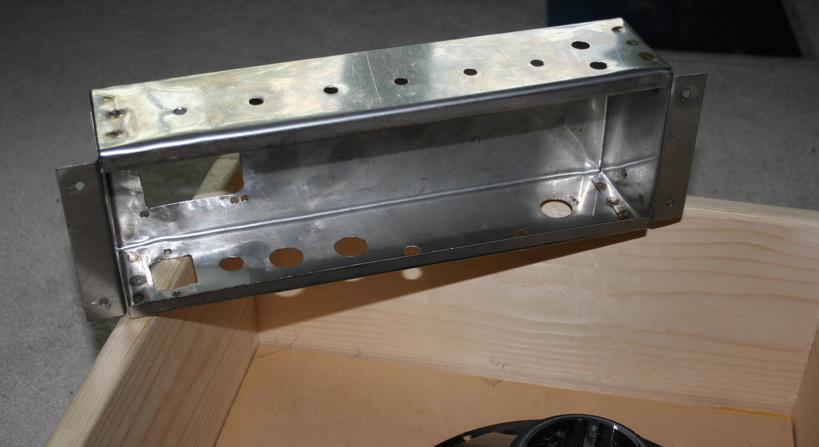 Stainless is quite hard, like a heat-treated steel, best machined properly rather than with hand tools, or use a grinding process. Its easier to work than titanium though
•••
M

Most of the stainless steel can be made soft by heating to red hot and quenching in water. Once soft, can be drilled with normal drill bits. To harden again, heat to red hot and cool naturally. (opposite of steel). We saved money on drill bits over few hundred undrilled flanges. Regards.
•••
G

(The original is attached, in case you never encountered it.)

I only bent one out of SS just to have an amp with it. And I am giving it away, oh well. I used to work at a aircraft parts manufacturer and a great deal of my time was messing around with the heat treating ovens and furnaces. This project is on hold now, I am making a camper trailer and need to work on the frame, regular steel not SS. We only have a little more time of mild weather, we did get a big unexpected dump of wet snow last week. The snow stuck to the leaves and a lot of the trees could not hold up to the load. Brought down power lines, I saw the one behind my house arcing, I thought it funny as it was 10:00 pm and It was as bright as daylight through my window. It broke and ended up on the ground, wet snow and all. I held myself back from getting too close to it. (I am the inquisitive type) Thankfully my power was only out for a day, some people are still out for a week. I lost two maples and an oak, they say it may take a year to get the whole city cleaned up again.
•••
G

Printer2 said:
Thankfully my power was only out for a day, some people are still out for a week.
Click to expand...

I've been reading about the snowstorm and the amount of damage it's caused out East. When nature takes over like that, we all get reminded who's in charge.

Back in 2014 we had a pretty violent windstorm in this area (Vancouver and surroundings) that cut power to tens of thousands, and dumped fallen trees and broken branches on roads and highways, blocking many of them.

We had no power for four and a half days, and we were staying on a small farm with no municipal water supply, in a suite with only electric cooking. So, no water, no heat, no working stove, no refrigerator. Nearby gas stations were out of commission too, but thankfully I had a nearly full tank and was able to drive far enough to find and bring back some canned food, which we had to eat cold.

But we were lucky. It was winter, but mild Vancouver winter. Cold enough to be a bit uncomfortable with no heat in the house, but not cold enough to be life-threatening.

Incidentally, how heavy is that stainless-steel chassis?

It is pretty light gauge, my caliper has a dead battery so I can't say what it is.
•••
P

My current pursuit bumping aside the amp project, a bolt together trailer. 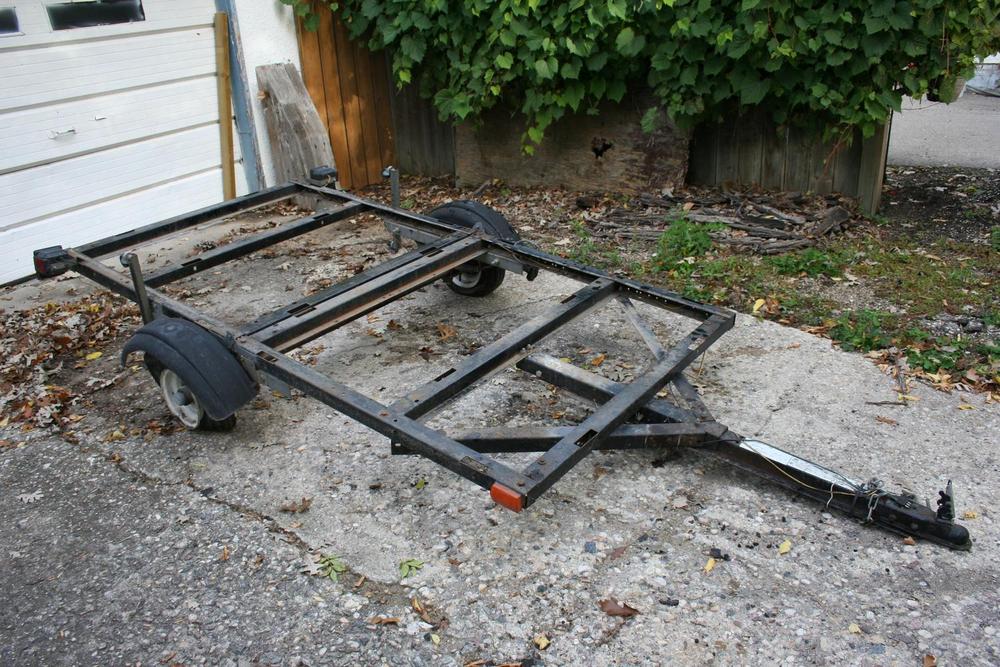 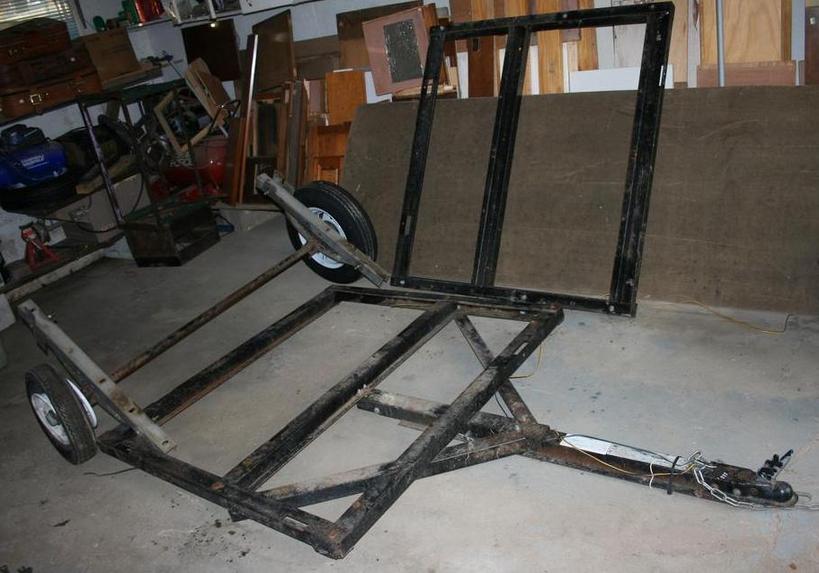 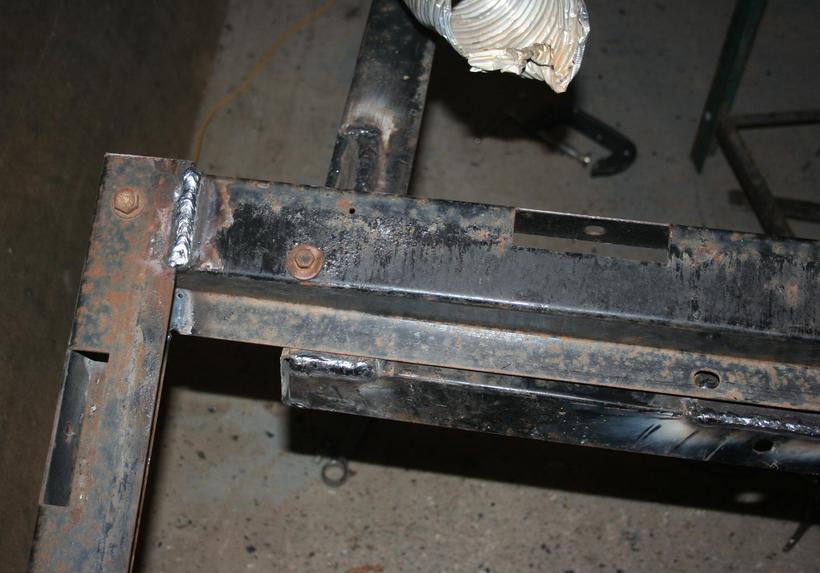