I used quotes around "finished" because projects like these tend to never really come to an end.

Beside my all-analogue ambitions (home made record player + RIAA) I also wanted to get really good sound from my computer.
I purchased a WM8741 based DAC (Weiliang DAC7) just to have something to experiment with.
I have not really analyzed the schematics of the DAC7 but think the output buffer stage looks a bit too complicated. Anyway, I wanted a tube buffer there so I put together a simple one inspired by Lukazs Fikus Lampizator projects.

It works very well, but adds even more tubes and capacitors in the signal path.
The drawing below shows the principle. I have intentionally left out some stuff (and component values) 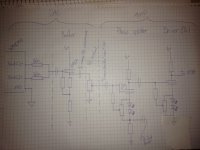 The I came to think; couldn't I get rid of a whole bunch of components if I feed the balanced output from the WM8741 directly to the driver stage of the amplifier?

So this is what I tried today: 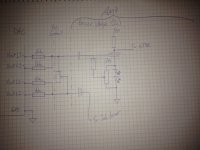 The value of the pot is 1Mohm (what I had available). As you can see, I have now 2 tubes and 2 caps less in the signal path.

At the lowest volume setting (volume pot setting: 0 Ohms), the load on the WM8741 is 8kOhms. Maybe that is a bit too low, I don't know. The data in the datasheet for WM8741 is specified at a load of 10kOhms.

I have not had time to listen very much yet, but it sounds very good after a brief test. Also, I get a higher signal level (since the amplification of both buffer and phase splitter is less than 1), which is welcome.

If this turns out good, I'll put some good signal relays in the amplifier to be able to switch between balanced (phase splitter bypass) and unbalanced inputs.

Anyone else have experience with this? Are there any major drawbacks with the second method? What is your opinion regarding sound quality?
Last edited: 2013-05-20 9:39 pm
•••
Show hidden low quality content