I have a set of Grado SR80i which I absolutely love the sound of for the price.

However recently the left cup started cutting in and out with the separation between in and our separtated by this awful clapping/slapping sound.

So I've opened up that cup and it seems as though the driver body has separated from diaphragm (apologies if my terminology is wrong let me know if I need to clarify anything).

The noise is the two happening to come back together (the cable mean it can relocate) and it cuts out when they separate.

I can push the two back together and there is a little bit of friction which will hold it there for a bit, but I bet I am going to have to reopen these with a few weeks or months - it also can't be good for it to have it flap around.

So my question is: Where can I apply adhesive to hold it in place and what sort of adhesive should I use so that I don't negatively affect the audio quality.

It looks as though there was a small amount of adhesive on the very perimeter of the drive which has dried and cracked. I could reapply that but I am not sure what sort of adhesive to use. 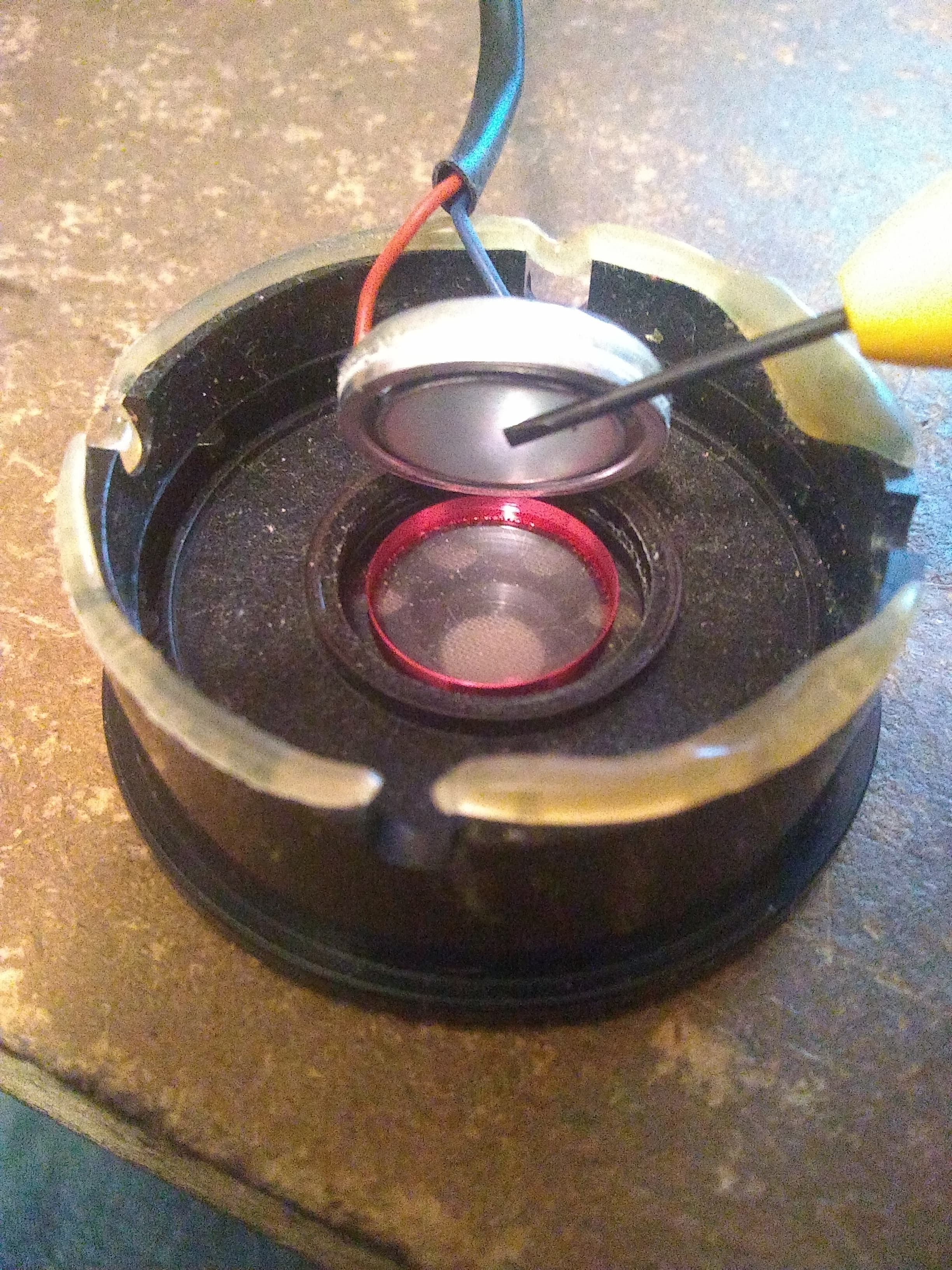 PS: I've traveled with these headphones so they've had a pretty hard life, I don't think my issue should reflect poorly on the manufacturer.
•••
R

Joined 2020
I did, they want 40USD to fix and it'll cost me a fair bit to post them to the USA in first place and I'll be without them for weeks. This looks likes something that is eminently home fixable, I just need the right adhesive, I just don't want to use any that could damage them.

They've obviously they've used a lot of hot glue in the headphones construction, so I am tempted to just use that, it's just the bond between the driver and the plastic housing so I am not too convince it's of the upmost importance.
•••

Joined 2004
stephan.win31.de
I think the bit that came off is actually the magnet. The ring in it is the air gap, matching the voice coil (red) on the diaphragm (bottom). So basically we're looking at the back of the driver here.

Whatever glue you end up using (I'd think some sort of epoxy perhaps) must be able to take any force encountered in operation while firmly bonding the magnet to its surroundings (plastic, I guess?). Air tightness is likely to be a priority to some degree. The air gap looks reasonably wide and the magnet's position seems to be rather well-defined, so centering should not be too difficult, but you should nonetheless make sure that the driver does not exhibit any voice coil rub / buzz after reassembling (check with bass tones).

Interesting construction either way, compared to other companies like Sennheiser who have driver modules that clip in. The driver appears to be basically integrated with the housing here.
•••
D

Joined 2020
Great response. Yes the party which has separated from the red ring is the magnet (or at least very magnetic!).

I will bond it back in using epoxy like you suggest and ensure there is no rattling or buzzing.