The output transistors on one channel of my son's 400 series receiver have blown. Unfortunately he temporarily used bare ended wires to connect the speakers pending receipt of the proper two pin plugs. This led to a stray thread of wire getting trapped and eventually shorting the pins in the socket.

Replacement germanium transistors seem to be unviable for all practical purposes and I was wondering whether the amp can be modified to use silicon transistors. Can anyone help please?
•••

If you post the type number of the components you require, I have many power OC16s etc transistors and can take a look for you.
A schematic would help me design around silicon for you.
Reactions: 1 user
•••

Have a look inside your 421.
There are 2 types of 'power amp' board. The 421 and earlier 521 amps used the A14 board which is all germanium.
The later 521 amps and some 421s that have been in for repair have the A15 silicon based power boards.
https://www.audiomisc.co.uk/Armstrong/500/500diags.html
If you have A15 boards conversion to silicon outputs (2N3055s) is reasonably easy and covered on the net. Unfortunately the A14 germanium based boards do not lend themselves to conversion. (There are a few uncompleted threads, on several forums, where people try...)

So choice is if you have A14 power boards, replace the AL 102 transistors like for like or near equivalent, yes you can still find them. Or find a pair of A15 power boards and modify ALL the outputs to silicon devices.

surplussales.com of nebraska has germanium TO-36 stud mount power transistors for $4.50 ea. Located in Nebraska. May have others in the 4 pages of transistor listings, I didn't look. https://surplussales.com/Semiconductors/transistor.html
Products I have received from them previously have been genuine. Mostly ex military stock I believe, they are near Offutt AFB.
Last edited: 2022-07-26 5:31 pm
•••
M

Thank you for the replies.

It has the A14 board so. maybe, adapting it to silicon is impractical. Jon, the schematic is on the post by Alan, but it doesn't show the component values. I don't have the unit to hand to find out what they are but I can get it in a couple of days. The output transistors are AL102s. I have found an equivalents list which shows variations on AL100 and AL102s and 2n1906 TO3. They are all rather expensive at over £20 each and I wonder whether the receiver is worth the expense if simple replacement of the transistors is the only option.
•••
M

Thanks Indianjo. The existing output units are TO3s so I am not sure whether the ones you refer to would be suitable.
•••

A bit complicated to match together, but here are the component values and cross reference to the boards.

Moderators if this is against the rules please delete ! I have read on the Uk vintage radio forum a no of articles converting the Armstrong 421 /521 to silicon there is mention of an all pnp version that will suit the A14 board
its simple enough to change the outputs and drivers
Trev
Reactions: 1 user
•••
G

I have silicon pnp on my 521 A15 board. Specific resistor values can be an experiment, as bias depends on it, the board is also very much depending on power voltage for bias current.
http://www.gerardslikker.nl/armstrong-521.htm
I used MJ15025, the choice was based on the fact I had those already.
•••
M

Thanks all. Although there is some excellent information about modifying the A15 board I cannot find as much detail about the A14 one. Maybe this a bit of a non-starter. My son has a variety of elderly amps but he likes the looks of this one
Click to expand...

I think the attachment in #3 is a really useful hint to convert from these unobtanium AL102's to common 2N3055's.

Not even a need to rewire the whole output section to NPN.

you would just need to adjust bias resistor values.

Something even easier would be to add parallel resistors to existing bias resistors.
which to me looks like what the factory schematic for A14 is doing to adjust idle current.
Reactions: 1 user
••• 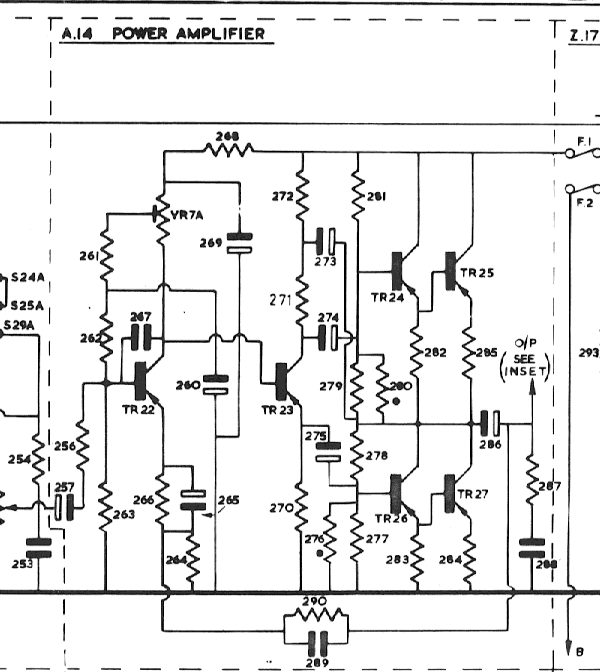 not correct the resistors with dots are thermistors the resistance falls as they get warmer
Reactions: 1 user
•••

thermistors
hmm that is interesting, so it does have thermal tracking.

leave thermal tracking circuit and then bias can be adjusted on other side then instead.

Excuse my extreme ignorance here but how does 271 affect the bias? Now for an even dafter question - would I increase or decrease the values of the resistors to get the increased bias for the Si transistors? Would variable resistors be a good idea? You can see I am an absolute novice regarding solid state circuits!
•••

R271 does not affect bias! This is part of a Concertina phase inverter, capacively coupled to the output section. Without any circumlocution derived from tube technology .

It is more customary to see this topology with an interstage driver transformer. R270 and 271 would be the secondary windings. C273 is a bootstrap - that may be what looks confusing.

Are the original Q24 and 27 Ge devices also, or were they able to obtain PNP silicon drivers back in those days?
•••