Joined 2009
This is my first forray into a FAST speaker. That is a full range speaker with bass helper.

These are designed by Scott (Scottmoose) will a little input from me on the cabinet design and shape and are a follow up from when young Chris661 came over to listen to my A12P standmounts (featured elsewhere on a seperate thread) and brought along his actve bass speakers so we could try them out with these to see how the bass was improved or not. As it turned out it was an improved combo and so spawned these standmounts.

They have been designed to be seperate cabinets using the above mentioned A12P standmount speakers with the active bass helper cabinet below. They don't have to be joined together and are designed so for anyone who wants just a active bass helper speaker to augment any small full range speakers they can simple build the bass helpers. In my case I have built them as a single integrated floorstander.

It's early days yet as I have only built and finished one speaker. The other is still in finished panels ready for glue up. Still need to play around with phase, volume and XO points when I have the other cabinet finished. However early listening to the one speaker and one standmount with the bass speakers crossed over at 100Hz and 90 deg phase angle on the bass helper suggests these do the biz by retaining all the qualities of the A12P but with reinforced bottom end detail.

Here are some photos. 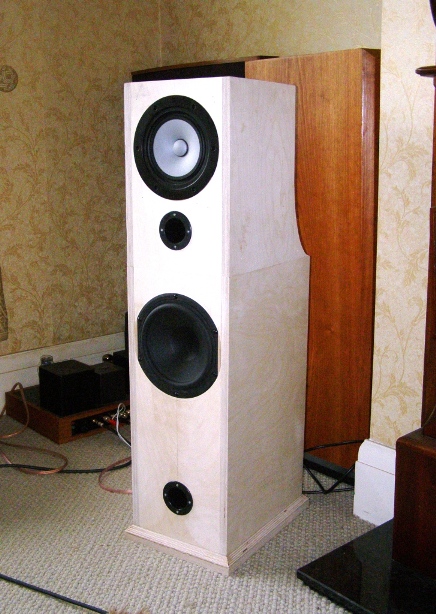 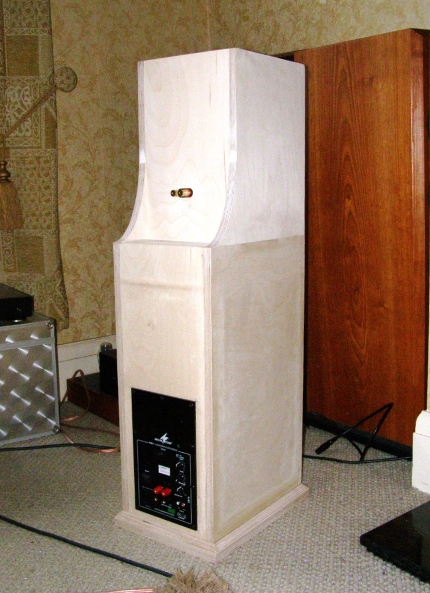 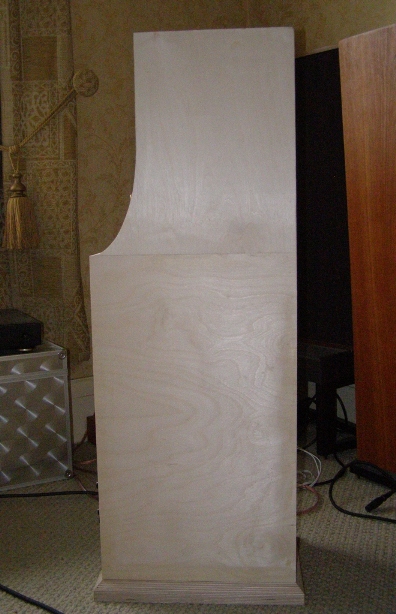 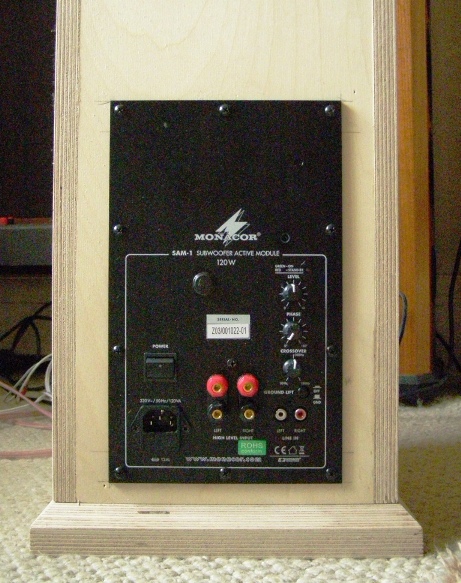 Not sure where this design is going as they are still in the experimental stages and a project still under construction but initial listening has encouraged me to make some grille covers for the speakers as I feel the naked front baffle distracts a little with the difference in the two drivers. I think this makes for more eye candy, but then i would be biased wouldn't I.

Anyway here's a photo of the one finished (in bare birch ply) with the grille in place. 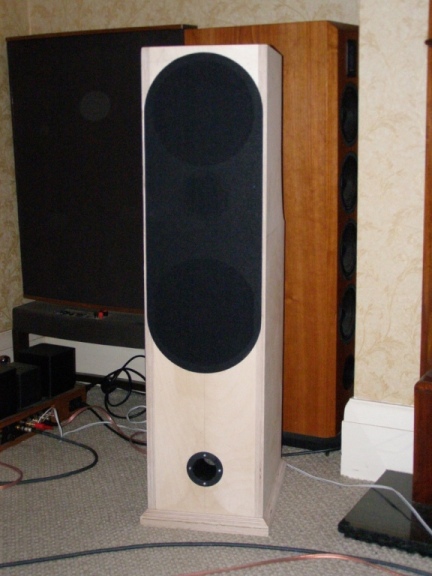 Joined 2011
Paid Member
Hmm... build looking good Colin, and in the long run I just might have to settle for something like this given my liking for Zimmer music like Inception and The Dark Knight Rises OST... not to mention rock and metal Look forward to more listening impressions once both cabinets are done.
Last edited: 2013-03-15 2:15 pm
•••
W

...a follow up from when young Chris661 came over to listen to my A12P standmounts (featured elsewhere on a seperate thread) and brought along his actve bass speakers so we could try them out with these... They have been designed to be seperate cabinets using the above mentioned A12P standmount speakers with the active bass helper cabinet below.
Click to expand...

Joined 2005
Looks like a Peerless HDS woofer. Just a guess.

Pretty sure that's the one, yeah.

I got to see the Peerless driver before it went into the cabinet. Really nicely made.

To expand a little on what Colin has said, the speakers I took around were my FAST speakers with Tang Band W6-1139 woofers. You know, the 6"ers with ~13mm of one-way travel.
Put mine through an active crossover and big ol' solid state amp, and set the crossover and volume low.
With the crossover set to around 55Hz (where the Alpairs begin to fall off in the small ported cabinet they were in), we then got the subwoofer volume so that, while in-play, you didn't notice them, but you could immediately tell that they were gone.

Joined 2005
Nice build! What's the sense at this point of how the Peerless HDS matches with the A12P? The reason I ask is that I'm considering doing the same thing with an SBA SB34NRXL75-8. I'm concerned though that it may be overkill if the A12P is SPL limited even if crossed over a little higher say 200-400Hz.
•••
Z

Any updates on how the speakers are playing?

Did you get a chance to play any heavy (and noisy) stuff on these?

What's the sense at this point of how the Peerless HDS matches with the A12P?
Click to expand...

You'd have to ask Scottmoose direct that question as he designed the woofer boxes and chose the peerless to match with the A12P performance. Though the Peerless is a little down on SPL over the A12P this is not an issue as the Plate amp has an independant volume control so we simple dial in a volume to match the A12P. At present I have 2-sets of speaker leads from each my monobloc 300B power amps. One set of leads goes to the Peerless driver via the plate amp the other set direct to the A12P. So we are driving the A12P full range and limiting the output of the Perrless via the variable crossover and volume controls.

Any updates on how the speakers are playing?
Click to expand...

Hi Zia, Not a lot to report really. I have been driving the Peerless woofers with some generated low level tones via my CD player on constant repeat to help free up the drivers. However, I did invite a mate over the other week for his views on the set up where we played around with varying XO points and volume settings on the woofers on a range of music. The only conclussion we came to was the need to measure the output of the speakers with regards a full range frequency sweep to try to establish any peaks and troughs to help decide the best XO point. This aint gonna be an easy build, wire up and play speaker, much to do there is young skywalker, to coin a phrase.

So for now I have moved on to other 'in the pipeline' projects and will report back on these when my mate Andrew comes down from Scotland with some measuring equipment and hopefully get these proper sorted, like.

Zia you have PM regards that other project we have been corresponding.
•••
R

Wow! That is exactly what I was looking to do, I was planning on modifying my Super Pensils as I am not too happy with the low freq. resp.

Joined 2005
wodendesign.com
No, it was a one-off I did for Colin which we both decided didn't work all that well. Level matching was a royal pain in the neck since they were sub units meant to be used with the vented box mains (for simplicity when prototyping, Colin built the boxes as one unit) & we never could get the two legs consistently blended. I think the boxes ended up being recycled. If you're going down the 2-way route, do yourself a favour and make it a proper 2-way. But you'll need LF drivers with a decent high end, & fairly substantial component values if you go speaker-level passive.
Last edited: 2013-12-06 6:47 pm
•••
B

Joined 2003
I went the dedicated sub route. I can report that the results are very good indeed. And I still have a lot of options that haven't been explored.

I cannot see how proper integration top/bottom can be accomplished without DSP. The XO needs to be rather sharp and, since the subs are side-firing, there is a time delay that has to be corrected.

Bob Brines said:
I went the dedicated sub route. I can report that the results are very good indeed. And I still have a lot of options that haven't been explored.

I cannot see how proper integration top/bottom can be accomplished without DSP. The XO needs to be rather sharp and, since the subs are side-firing, there is a time delay that has to be corrected.

Maybe I am stupid for having my heart set on staying with a 100% analogue setup without XO. With only 4 watts to work with my options are limited.

That was why using my pre out and then Class D amp with helper woofers with XO and don't XO my A12P's seemed like a reasonable idea...
•••
B

Joined 2003
The whole reason for going FAST is to relieve the A12P's of bass duties. That requires an XO. 4w will be plenty of power for the A12P XO'd above 200Hz or so. If you run the A12P's wide open, 4w is iffy, particularly if you listen to any rock, classic or otherwise. You will then want to XO the woofer at something like 40Hz (MLTL) or 60Hz BR. A Q=.7 sealed box would cross at ~100Hz. I suppose at those low frequencies timing errors would be moot.

One thing that often gets lost is just because a speaker is not producing any sound at low frequencies, doesn't mean that the driver is not trying its best to use that low frequency power. You need the XO to remove unwanted frequencies from the driver.

Joined 2002
Bob; indeed - and while not specifically addressed in this thread, but currently the subject elsewhere, special cautions need be taken when using drivers such as the 12P in an OB / FAST type arrangement - special as in XO/HP filtering of the wideband drive at frequencies rather much higher than would otherwise be in their comfort zone in a ported or sealed enclosures.

Joined 2003
Where to cross a FAST pairing depends a lot of the excursion characteristics of the driver/box. In my case, the maximum excusion of the A10P in a BR is in the neighborhood of 100Hz. Crossing at 200Hz is an octave higher, and cone movement is near zero at the F3 point. Crossing any higher would not gain any advantage. The higher the XO, the more likely the phase rotation of the XO will be heard. 300Hz is the generally stated upper limit. By the same token, a tweeter should not be crossed lower that 3kHz -- the telephone band.

I am well aware of the conventional wisdom that the bottom driver should not be a sub, but be a mid-woofer capable of rather high frequencies. 6"-8" drivers are usually recommended. I chose a 12", honest-to-god sub. Based on the FR plot alone, the break-up -classic metal driver spike -- Is above 2kHz. That means that it should be useful to nearly 1kHz. Of course, the polar response would be so narrow that crossing to a dome tweeter would be spectacularly bad. This is not an issue crossing at 200Hz. The polar response is still pretty much hemispheric and I am using two subs, so source location is not a problem.

Do you want a real test of bass/treble integration? Find some music with a lot of 'cello work crossing middle C. This was a major problem with my Goldwood H-baffles. The hand-off sounded awful. Never did straighten it out. My new car with a premium audio system sounds awful for about 1/2 octave. My new subs -- smooth as silk.

jimbro said:
How do you find the max excursion frequency?
Click to expand...

You will have to model your driver/cabinet to find this. With BR's and MLTL's, max excursion occurs ~one octave above the resonant frequency. Of course, below resonant frequency, the cabinet unloads and excursion scyrockets, but that is another issue.