A question about directivity in Boxsim simulation

Hello, I've a pair of good old Sipe DT25/60.8 RT (about 13 years old but still working, they were part of Chario Syntar 2 two-way bookshelf loudspeaker) and I'd like to bring them back to life. I've thought to a two-way using SEAS ER18RNX in a ML-TQWT tower (because I've listened a similar configuration and found it very enjoyable).
So I've traced response and impedance of Sipe from old documentation and put it into Visaton Boxsim to design crossover and simulate configuration.
Here's datasheet and the traced response (viewed from the frd put into Boxsim): 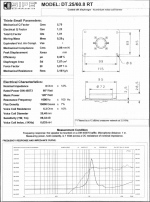 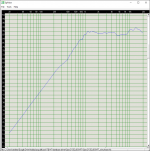 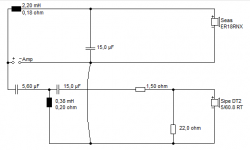 The simulated response and phase:

The simulated response including acoustic power response and my first question: 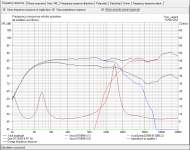 Hers's finally the directivity response and my second question: 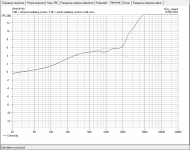 Why directivity increases strongly as acoustic power decreases starting from 1.5 Khz (dotted the directivity of a "normal" two way other project)? What really is "directivity" for Boxsim? How does it know the driver behaviour at 15/30/45 degrees if I gave it only on-axis response? Where am I going wrong?

Sound Power, usually expressed in acoustic Watts, in your case SPL,
is a weighted average of a great number of measurements made at
the same distance from the loudspeaker. Because a loudspekaer diaphragm
is called to emit different frequencies ( lower have greater wave length than
higher) the speaker becomes more directional as you move higher in scale.
That's why Sound Power falls off with higher frequencies. Shorter wave
legths have more problem to wrap around a speaker cabinet. Directivity
plot is the difference between On-axis response and Sound Power. You have
to be careful with simulations and really know what you're doing in order to
get meaningful data that compares to reality well. Boxsim uses preprogrammed
formulae for calculating off-axis spl based on cone/dome diameter you enter to it.
•••

You might wish to check the diameter you have entered for the tweeter, just a guess.
•••
A

I checked every parameter, including diameter of tweeter, and compared project with another one using for tweter ScanSpeak D2608-193000 with the same crossover of the "Opus" mini loudpeaker published here some years ago and its revised version by Dcibel (now revised in the bass section by me).

Have you clicked on the Baffle and Position tab and checked the diameter there?
•••

Have you clicked on the Baffle and Position tab and checked the diameter there?
Click to expand...

Great, there was that number wrong, what a mistake! Now it goes better, it remains just to moderate the highest part of the response but it wouldn't be a concern: 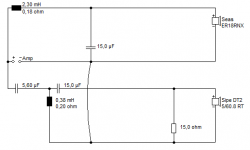 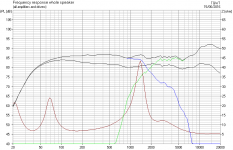 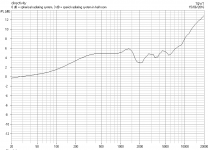 I think you'll end up with a 4.7R or so resistor in front of the tweeter filter with an 89dB tweeter. When you import FRD into Boxsim, I think it asks for frequency point corresponding to 90dB. Possibly 3000Hz would be OK. Bit vague on that, because I don't do this often except for a few concept tests.

Low crossover is an idea here, but a bit demanding on an apparently non-FF tweeter IMO.
H1456-08 ER18RNX

MarkK did a useful bass filter for the ER18RNX with a notch around 5kHz. I was playing a variant with this, and it all seems good. The 5.6uF in the notch is a moveable feast really. 4.7uF might be better. The 10uF shunt is OK too, and quite SEAS IDUNN, but I think you'll hear the 5kHz peak. FWIW, I found a second order 6.8uF/0.2mH tweeter filter good too.

I think you'll end up with a 4.7R or so resistor in front of the tweeter filter with an 89dB tweeter. When you import FRD into Boxsim, I think it asks for frequency point corresponding to 90dB.
Click to expand...

I gave a try but something misses..in my opinion 4.7 is too big for this tweeter. Just for curiosity here's the original and impressive crossover through which Sipe tweeters sounded for years with a certain satisfaction, until foam surround of woofer went away (two way "Syntar 2" by Chario).

Unfortunately I haven't woofer parameters but for sure it wasn't anything of strange or special, a "normal" woofer with a classic sensitivity of about 90 dB.

MarkK did a useful bass filter for the ER18RNX with a notch around 5kHz. I was playing a variant with this, and it all seems good. The 5.6uF in the notch is a moveable feast really. 4.7uF might be better. The 10uF shunt is OK too, and quite SEAS IDUNN, but I think you'll hear the 5kHz peak. FWIW, I found a second order 6.8uF/0.2mH tweeter filter good too.
Click to expand...

Thanks for your suggestions, the best way to understand what's better is to build, measure and listen. Consider that this idea will be a didactic project, expecially centered on the ML-TQWT loading for woofer, if everything will be ok in that region the next step will be an upgrade using a Scanspeak D2608-913000 tweeter with a lower cross-point (about 1.5 Khz), using a schematic similar to "Opus mini loudspeaker" by Smnjn and its developments. In that case 5 Khz notch might be really unnecessary.
Have you ever build a TQWT system?
•••

I think you're right, 4.7R might be too much. That ER18RNX has about 3dB more than most 6" woofers. I've just plugged my own 6" project in to reassess. My old Monitor Audio 8" speakers were simplistic crossover too, below. I do better these days with higher order filters. But second order sounds lively.

I've made three crossover adjustment suggestions. Please ask if you have any questions.

I have another proposal, build a crossover with less phase distortion, see: Tho filters are electrically of first order (plus a notch for fundamental resonance of tweeter) , mech an term overload should not be an issue. This will sound thin because of a deep and wide off-axis midrange gap (slip tweeter plate under woofer basket as far as possible in order to reduce distance) but also more impulsive because of less phase twist (and, if the amp is weak, because of higher sensitivity).

Grasso789, I can't imagine what sort of 6" woofer will behave like that on a simple 1mH coil. It's going to rolloff at about 4-5kHz in practise.

andreaemme said:
Why acoustic power decreases so strongly starting from 1.5 Khz? What really is "acoustic power"?
Click to expand...

Power response is almost as important as the classic SPL frequency response on a given axis, usually on axis, facing the front baffle, because it gives you an idea of what the steady state or "in room" response will look like, and yes it is usually falling down in a similar way, mainly because of directivity, and this is not necesarily a bad thing if the slope is moderate and most of all regular, without down and up at xover.

In this case there is a big dip there, basically because the model used is too simple and considers the driver as pistonic sources, which fortunately enough they are not.

Don't worry though, since all 2 ways designs based on a midwoofer + a dome tweeter suck that bad, it is embeded in their DNA. 2khz is considered as a politically correct choice with LR24 xover. Imho, it's the worst of all possible choices. Better cut lower before the W becomes directive ( but which dome tweet allows that...), or go mad and cut at 3khz and over when the tweeter has become directionnal too, and use shallow slopes with lots of overlapping between ways. Designing off axis also helps to get a better controlled power response.

Btw, don't waste too much time on sims, better build and measure somthing, it's much more realistic and instructive...

Btw if the tweeter has a similar rising on axis response like shown by yellow curve, better not try to correct this at the xover. This would only make the power response worse.

Just toe-in the box till the tweeter measures flat. On axis is almost always the worst measuring and soundind axis for any good and bad drivers. Correcting on axis anomalies through eq only helps to make worse speakers.

At 1k5, without source dependence?

cut at 3khz and over when the tweeter has become directionnal too, and use shallow slopes with lots of overlapping between ways. Designing off axis also helps to get a better controlled power response.
Click to expand...

AllenB said:
At 1k5, without source dependence?
Click to expand...

AllenB said:
I don't think so.
Click to expand...

I understand, it's not common wisdom... What i do is sacrifying vertical polar response for better power response. Better or worse depends on use cases. For nearfield monitor 2Khz LR24 is usually OK because all sound is basically direct sound, or direct dominates. But in a living room at 3m listening distance, way beyond critical distance, power response matters much more than vertical polar response you won't hear anything about because reverberated dominates till the last top octaves, as the measuremet i posted shows. And wimpy dullish power response from a 2way designed as nearfield monitor really sucks like hell in these cases...
Last edited: 2016-06-17 8:21 pm
•••
G

system7 said:
Grasso789, I can't imagine what sort of 6" woofer will behave like that on a simple 1mH coil. It's going to rolloff at about 4-5kHz in practise.
Click to expand...

Of course. I just meant to show both idealistic ways and their idealistic sum and meant to express, that it can be done theoretically in a passive crossover. In the real world, the woofer needed some electrical parts in parallel to it and possibly in parallel even to the series coil. Also i assumed a baffle tho not infinite then bigger, than the loudspeaker box is prolly gonna become.
•••