stuck on this one...

1. how much power would each sub see?
2. what ohm would best suit the middle sub to make things as even as possible between the three...and would it be truly even?
3. how many ohms would each amp see?
4. would one rail work harder than the other rail?
5. is this a stupid idea?

I would never strap amps like that unless I knew exactly what I was doing with a particular amp. I never touch outputs of different amps. I would say get 2 ohm subs so you don't have to do that, or something like that instead of hooking them together. Often that will produce smoke from the amps from what I have seen. You could run different amps to different VCs of same sub, but that chart does not look right.
•••
J

A, I am not sure that it would actually work with the centre woofer.
B, I would mot do that because if there is any diferences between the amps and there will be they will be fighting each other on the same coil.
C, WHY?

Are these amps 2 ohm mono stable?
Why not run 1 sub at 8ohms on each amp bridged, it will still be 300wrms (assuming they are [email protected] ohms) and will have a higher damping factor than running at lower impedance so iwould work very well....
•••
P

The amps are only rated to 4 ohms mono so you're likely to blow the amps if you go lower.

If you had a load that was safe for the amp, you would have to tie the secondaries of al of the amps together with a large (8g+) wire to prevent oscillation or other problems.
•••
E

when i measure the voice coil plus one extra polarity , the load still reads 4 ohms...but i think i should hook up 3 coils and measure it again.

would i have to tie together all 4 amps secondaries, or each pair that are seeing a common coil?

would i have to tie together the secondaries leg per leg? does the auxillary supply for the ps drive circuit have to be tied together also?

tying the secondaries together has me thinking now...would this make it possible to truly strap the amps together in parrallel? just curious.

1 out of the 4 amps is way louder than the others...i think this is mainly do to the emitter resistor value change and the modified transistors used in the predrive/drivecircuit....the output transistor change shouldnt make this much difference (75watt vs 90watt) or should it?

With 4 ohm coils, this would essentially be a 2 ohm mono load for the channels connected to the third speaker.

You would have to strap the amps together that were driving a common voice coil. You would tie the center-taps together, not the rails.

You wouldn't want to tie the rails together. If one output section failed, it could destroy both power supplies if the fuses didn't blow quickly enough.
•••

Use one amp per speaker and save yourself a catastrophe. Keep the other as a spare or sell it for beer money.

If the leads of one VC touches more than one amp, I consider that some kind of strapping. Maybe not proper term.
•••
C

i can fit 2-3 subs in the trunk and stay in the consumer class with the power i have and be competitive.

if i enter the 4 sub category, im not sure if i will have enough power to be competitive...and will have to enter the pro class do to no backseat...

if i go for 4 subs 4 amps i have to buy 4 new coils and do more testing to match the spiders and Mms...

besides this, i would love to be still be able to look out the back window.
•••
E

Yeah, I got that email, but wasn't sure if you had put it thru it's paces. I'm confused as to why one amp would be louder than the rest. Measure the rail voltages on all the amps. Maybe one has a little higher voltage.

the amp thats louder has these installed:

BD909/910 outputs
BD909/910 predrive/drive circuit with legs bent around
TI opamps
0.1 ohm emitter resistors
3205 fets in PS
new rail caps, but 85 degree because thats all i had laying around.

it may be the drive signal thats cleaner and not clipping as early as the MPSU...making it seem louder...this amp has more girth... rear view mirror rotates more.

two things i know made a difference are the fets and opamps, im going for the emitter resistors then predrive/drive after that.

soft start circuit on all amps have been disabled.

ive since changed the fets and opamps in the other amps as well as the tantulums and potentiometers so they all match.

darn internet connection got cut off...

cant fit 15's in the trunk and be effective...not enough space to accomodate proper port flow.

when i finally had a chance to test that amp i ended up blowing a bank of fresh fets because the securing rails couldnt be tightened down enough do to stripped holes in the heatsink....

i gambled and i paid... so i rebuilt the PS again for good measure.

Before you start changing emitter resistors and what not, I would measure the rail voltage on all the amps. It seems to me that the predrivers could also influence the output.

How do you plan on repairing the stripped screw holes? The aluminum bars have holes that are larger than the screws, you may be able to just use a larger machine screw.

When you tighten down the aluminum bars, do they stay parallel to the fets or do they lean a little to the inside? I repaired a 225 and used some high temp 1/8" thick silicon tape instead of the double sided tape and the aluminum bars started leaning toward the pcb because the silicon tape wasn't applying equal pressure. I ended up using double sided tape anyway.
•••
P

None of the parts you listed should be able to make a difference on the output of the amplifier.

Is the amp louder (more gain) at low power or does this amplifier produce more output at the point where it just begins to clip?

If there are a few good threads at the bottom of the hole, this is a quick, reliable fix. 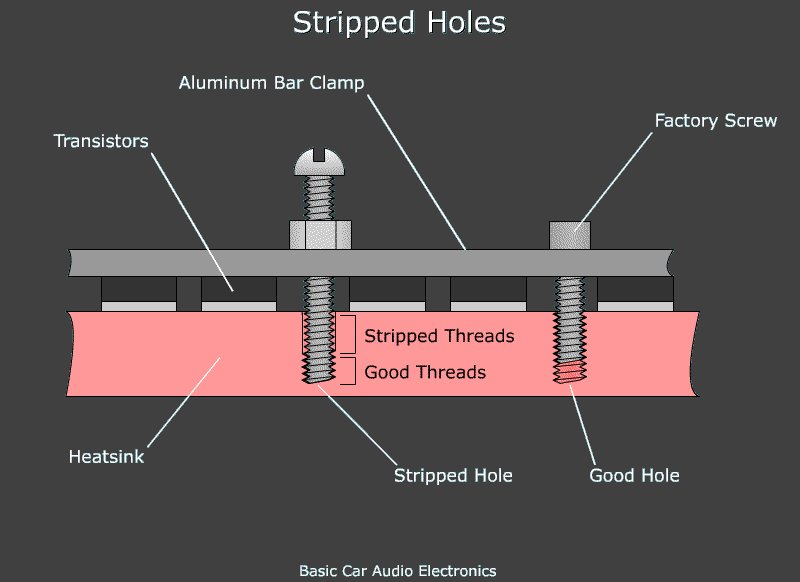 If there are no good threads or you want an absolutely reliable, permanent repair, install threaded inserts (Helicoil, Recoil...). 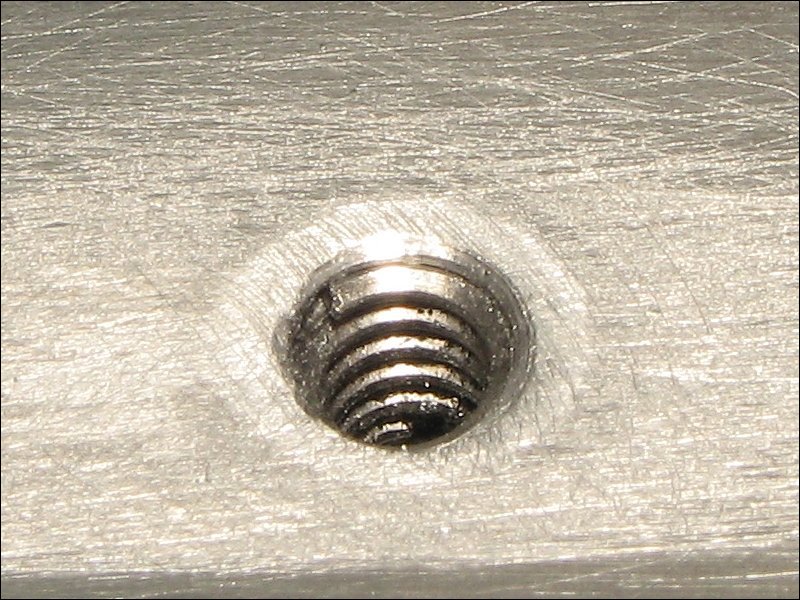 the fets are playing a part as well as the opamps, really...
the TI opamps are tighter... really im not imagining it.

faint bass notes in the background are more pronounced than before...i usually listen to the same 4 cd's every week then change when i get bored with them, so im familiar with the bass in the songs.

thats why i went ahead and did these two changes without question, so the other 3 amps are half way there.

its stronger throughout all levels, especially when it goes into clipping, it just goes crazy...when the other 3 start to level off and flatten, the loud one is like its shouting at the top of its lungs but is loud and clear, strong and hard and keeps climbing... still damped fairly well....i havent found its limit yet because my electrical goes first...50ah batt, 65 ah alt. (for now)

the gain is only a little bit above half way... the others were at 80%.

in another post i tried two amps at 8 ohms...this one amp alone at 4 ohms is way louder....it really is louder, maybe not more powerful...but louder.

really, no BS...im not kidding

the only other things ive changed are the pots, 25v tantulums and the 4 big grey 6 ohm resistors to 5watt 5.6 ohms...

i need to check the pot one more time to see if it is a fast rate or a slow rate pot..and also which location i put them in, do to stem length.

( i didnt know rates existed until the salesman told me, i thought a 50k pot was a 50k pot)...this pot wasnt changed at the same time.

oh...and im not getting disallussioned by the deck volume.

for the stripped holes i used some screws with a wider pitch and thread locked them into place for right now...almost all of them were stripped or were on the verge of being stripped.

i used cut strips of kapton on the securing rails..i will never use double sided tape again !

You need to switch off the bass boost/eq and match the gain on all of the amps. The best point to do this at the preamp level is the left-most leg of the muting transistors. You can also match them at the speaker outputs. The results will be the same.

Use a test tone of 50-100Hz. Black meter lead on the RCA shield. Set them as close as possible and don't touch the gains for the remainder of testing. Leave the EQ off also.

You should install the inserts in all of your amps. I'm sure that most of them have at least one stripped hole. It will probably take about 3-4 hours for the first amp and about 1.5 hours for each of the others. It takes a bit of practice to be able to install the inserts quickly. A drill press makes the task much easier.
•••
C

the bass boost on the amp stays off (on all amps), i never turn it on....when using this amp i have to turn off the boost on the Phoenix Gold MX-2 crossover also, as well as my bass cube.

when using the other amps i have to turn on atleast one, but never the one on the loud amp.

right now i only have one amp installed at a time, been swapping them out all week... to test after changing the parts...

should i measure output power while the amp is connected to the subs (box rise)? or find a big resistor? ok to use a lone voice coil?

When testing, you need to measure both the AC output and the rail voltage at the onset of clipping

does this mean when it starts to clip, or right before it starts.

how many do you want me to test? since the fets and opamps have been changed on all amps already...

isnt it possible for the amps to have the same power output, but sound differently?

this amp does not sound the same, the head of the bass is fuller and has more impact.
•••
P

The test tones are on the CD.

You need to test the amp that's louder and at least one of the others.

You need to use precisely the same load for each amp.

You need to measure the voltages at the output level where you can just begin to hear clipping. Drive each amp to the same amount of clipping (where it's just barely audible) and take the measurements.

Before the onset of clipping, if two amps are producing the same power with a sine wave, they should sound precisely the same unless one is defective.
•••
C

i over looked three parts, i had replaced the vertical regulator, transistor and that big resistor next to them in the power supply...

are these part of the pulse voltage modulation circuit? maybe the other 3 arent performing as they should?