After acquiring a Karslon K15 clone, I got inspired by Freddi to try the K-Tube with a 1" compression driver. Since the orginals are very rare, I made my own with the help of Fusion360 and a 3D printer. I have the first test pair printed. In the attachment, there is the STL model. I am looking forward to trying them out, I hope to find some time during the weekend

Please share your impressions! I have been fascinated by these for years but never had a chance to try them... Really are rare as "hens teeth"...
••• 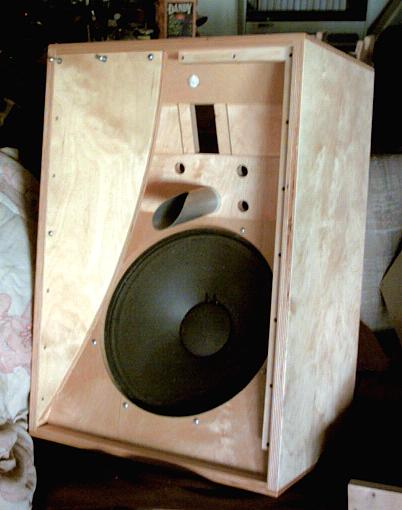 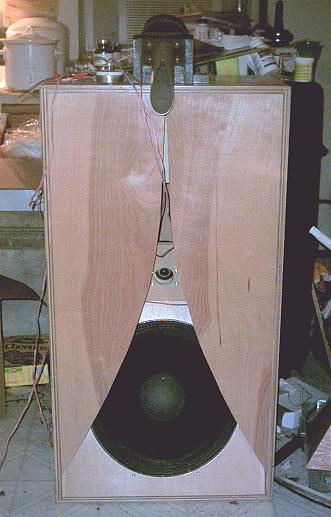 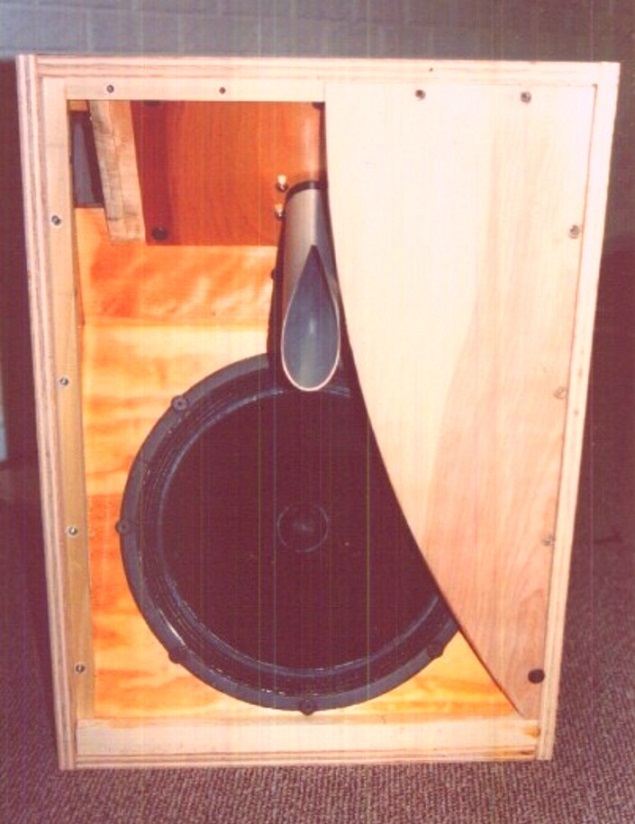 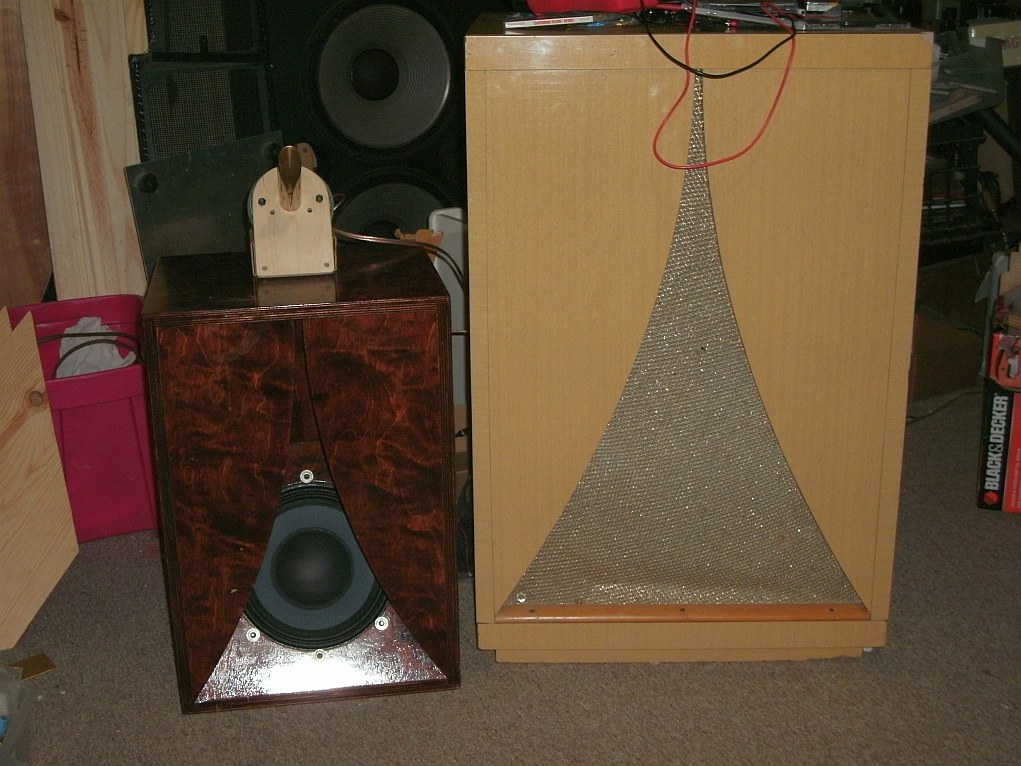 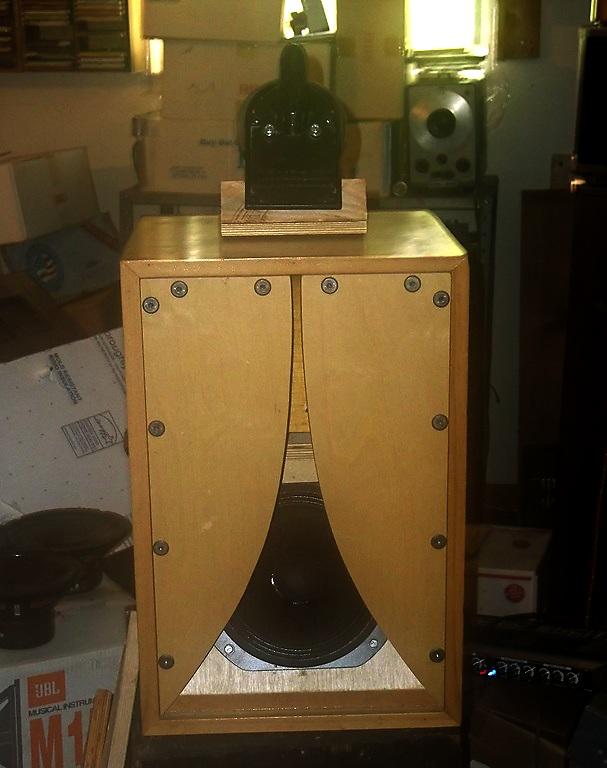 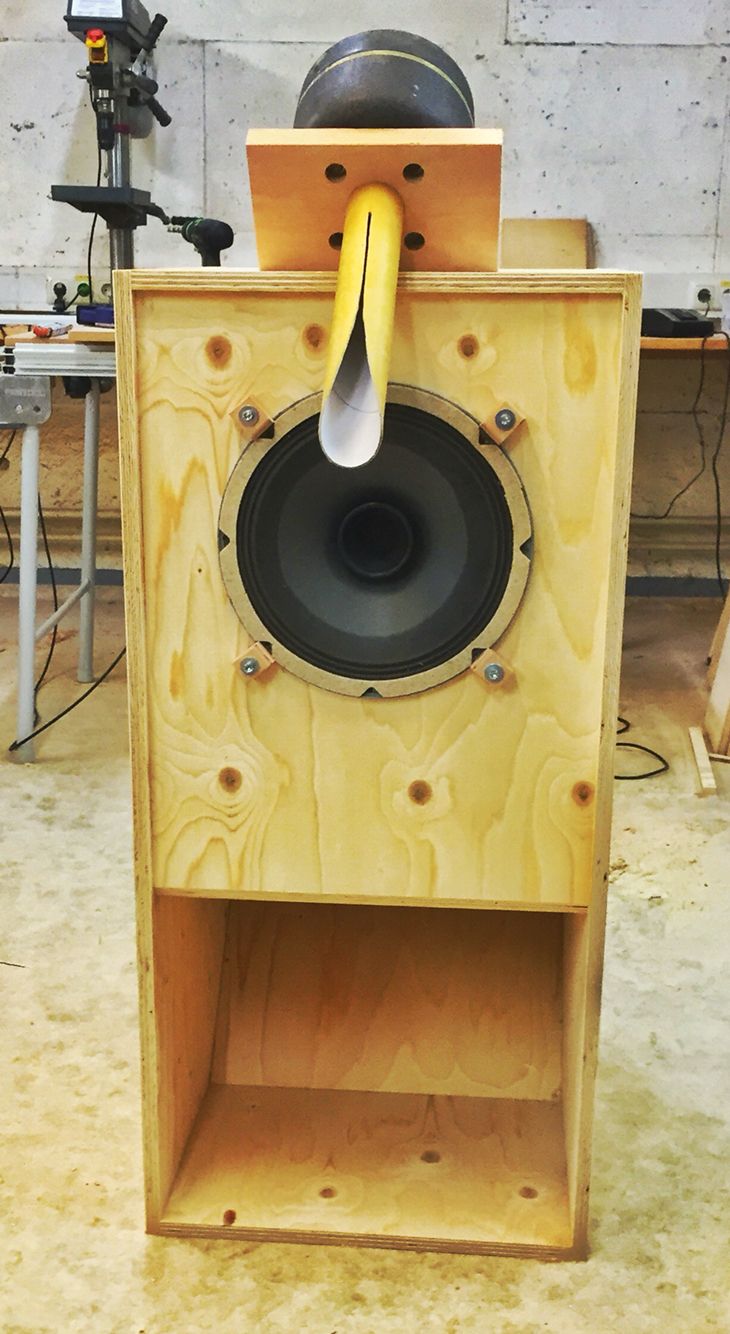 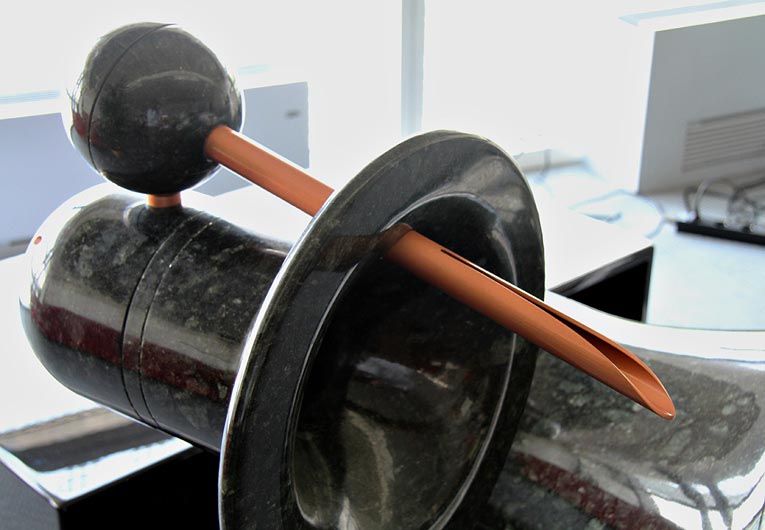 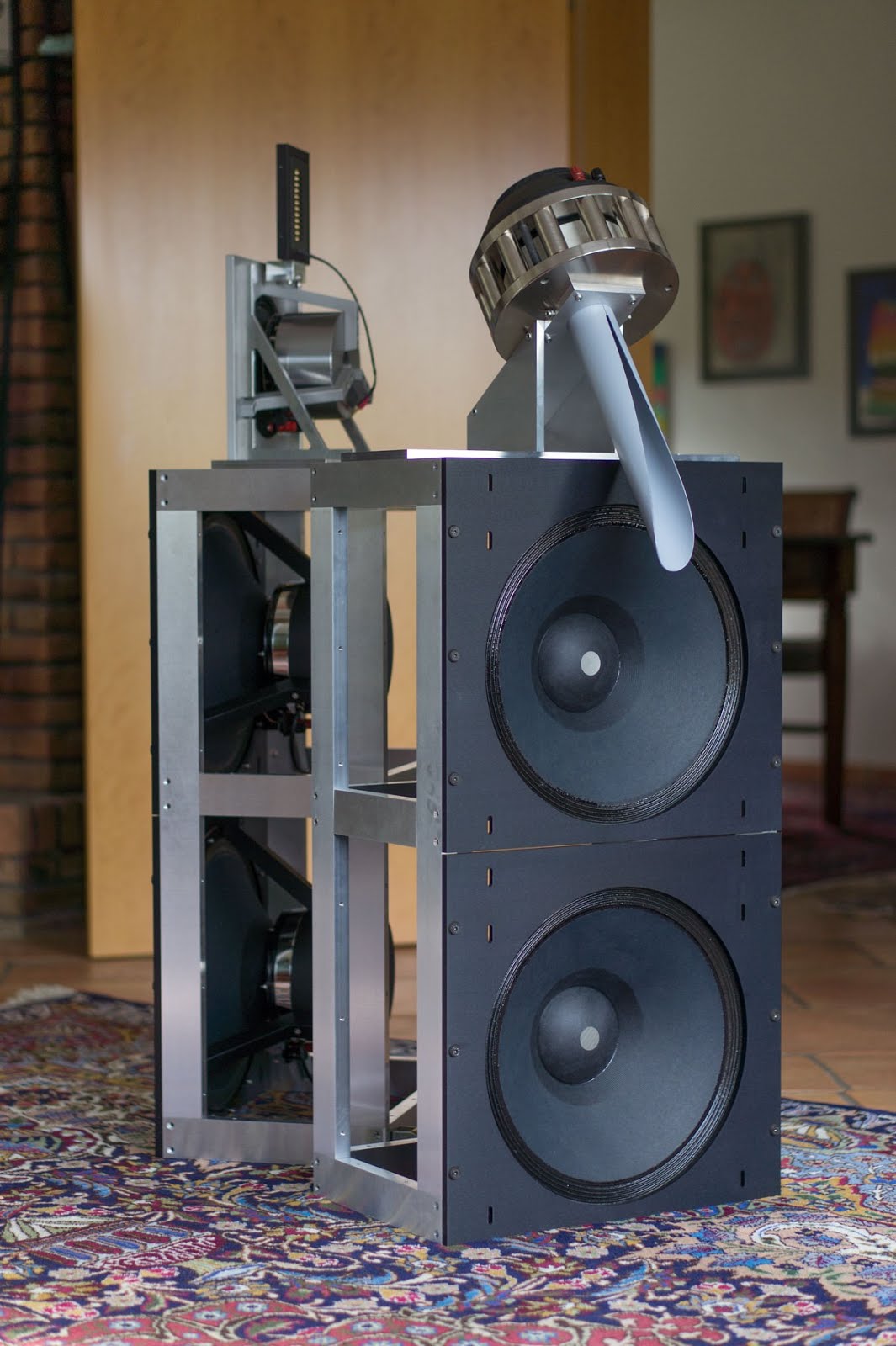 I will definitely share impressions. I built the 34c9 project (described also at DiyAudio), which loads the front of a woofer with 9 logarithmically stepped tubes. I really liked the result. The K-tube should work in a similar way I think.

Freddi, thanks for the pictures, I will need to experiment with the placement and these ate a nice guide for the start.
•••

I believe Transylvania Power made a 2" format tube ("Super Tube" ?) if directly scaled then would have been about 11.5" long. I've made a tube that length years back but didn't have a treble 2" CD to properly test things.

Along the lines of the K-Tube, Karllson associate Alan Weiss had a mini-klam slotted lens which attached to the bolt-on Eminience 1 inch format driver. I mocked one up from paper and tape and it was interesting. It might be cool if made stiff like the odiginal sheet metal model appeared to be.

I'm gussing the square portion was about 1.25" at most where the driver fed the klam. It was sold in a sub sat system, IIRC with Beta 8A direct radiator cabinets with the mini klam, and a modified Karlson subwoofer which made have had an external vent.

There was a crazy story which I missed at Job Ulfman's Karlson Speaker forum regarding this tweeter in a system. and
alleged "sabatoge" by "the mob".

I think Jon Risch may have heard this device as the tweeter in a 3 way systerm and IIRC it didn't meet THX requirements as sprayed highs everywhere. (not what one might want in a movie theater)

See if you can kobble one of them. 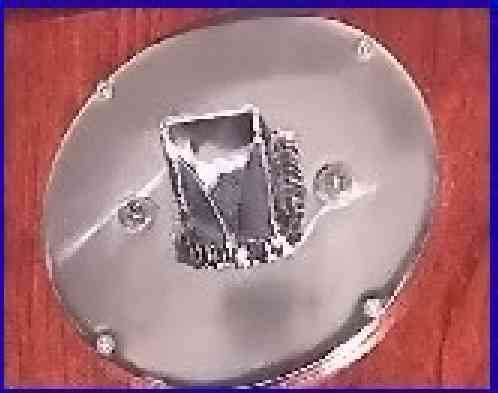 I did a quick test in my 4way horn system replacing the tweeter horn with the tube. There it plays from ca 4 kHz up. As a first impression, it seems more directional than a JBL2380 horn and maybe slightly lower sensitivity, that is basically all I can say now. I will need to do some proper measurements with the whole range of the compression driver. It did sound OK to my ear.

If you could make a sketch of the mini-klam with dimesions, I will make a 3D model and print a pair. It should be easier than the eliptical cut tube.
•••

you'll have to go by that picture best as possible - I'm guessing its 1.25" maximum inside square dimension at the square base where it mounts over the compression driver's exit and 40 degree angle from horizontal angle for the wings. You can muck with drawing until it looks like the only picture I saved from 15 years ago. That should give the nose gap and other dimensions.

I'm not sure if theres any "base" as the lens appears to be soldered directly to the round mounting plate. 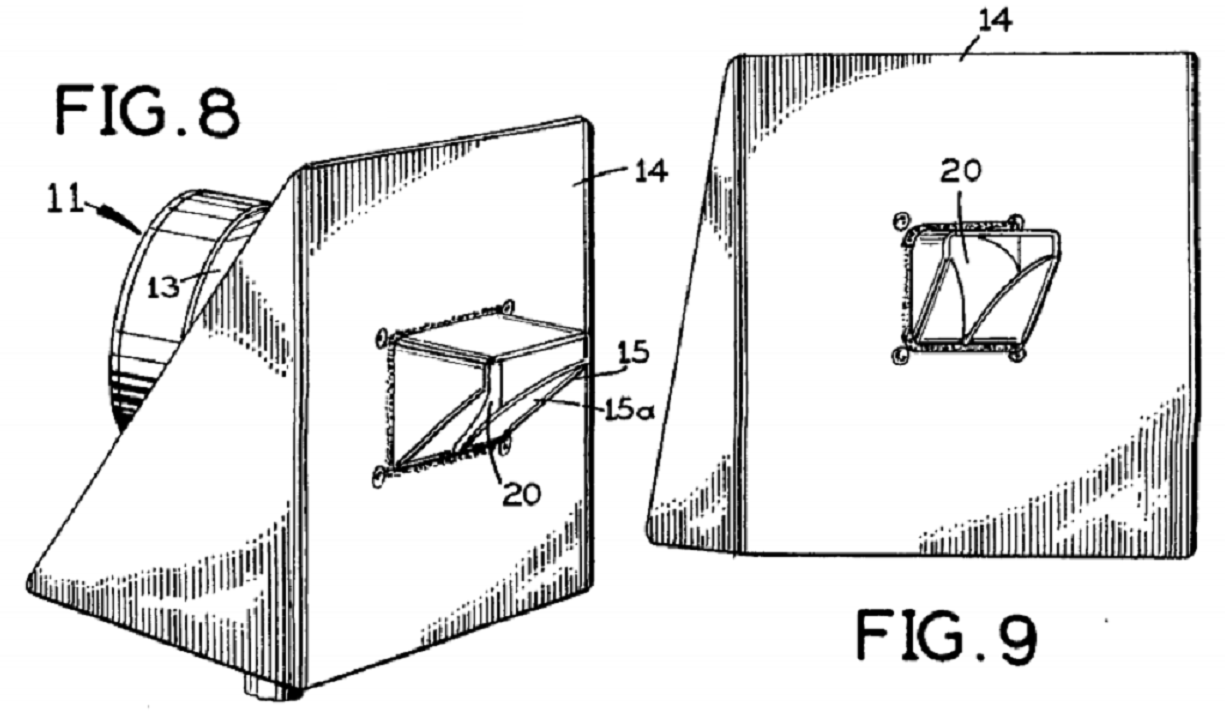 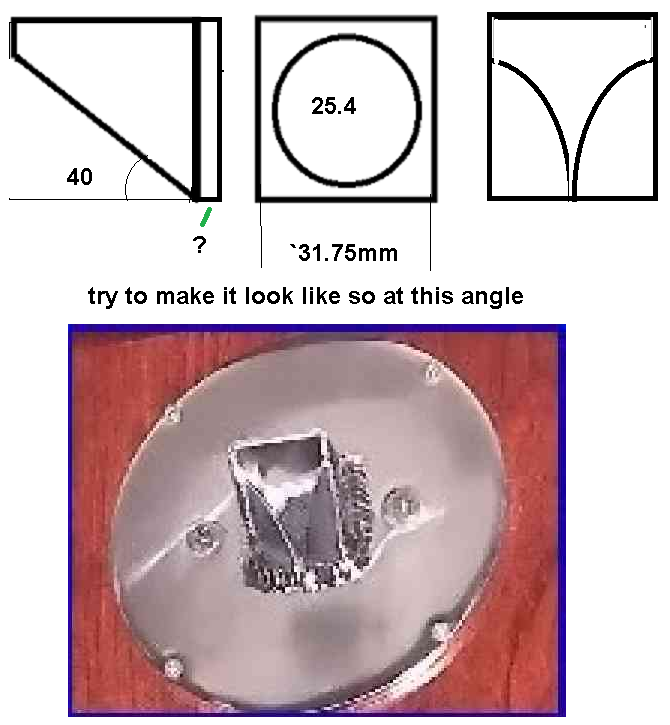 The standard spacing of the screws should be 3". In the photo, the base of the square seems larger than the driver exit, but in the patent drawing, it seems like it is equal to the diameter.

When I zoom the photo and measure from the center of the bolt to the hole that can be seen inside, it calculates around 1" - so I think I will make it 1 x 1" inner square with 3 mm thick walls and a square plate, that will make the upper plane horizontal when mounted on a driver.

besides that metal lens, Alan Weiss had a Karlson klam type product (shown below), loaded with an 8 inch Radio Shack version I guess of Pioneer's BOFU speaker. Baffle angle maybe have been 38 degrees. (I have those speakers) A 15 inch klam based on ~40 degrees was maybe the the best out of what I own

Your tube should work on top of your K15 crossed over around 2K or so with 2nd order or higher highpass.

Here's Karlson's 1961 letter to the late Martin C. Poppe (who later wrote the K-Coupler article as a thesis).

Karlson's large klam, was installed at Radio City Music Hall and the same as sold by Jess Oliver as the "Magna Clam"

Whether Karlson's idea of a klam's dispersion pattern is correct = ? I think they can sound cool and when mounted high, one can sit underneath and sound is pretty good. When I do remember about my tweter klam was that it did not seem to have a lot o energy above the top (long plate) The size is cool compared to the K-tube.

Speaking of K-tube - if you try that on top of your K15, experiment with a cardboard baffle at the driver plane to see if that reinforcces the lower end of the tube's reaponse 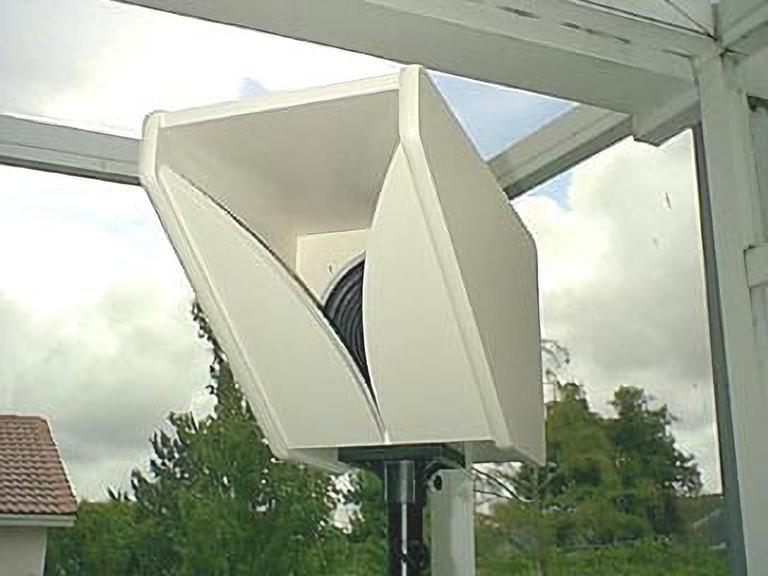 How could anyone go wrong with "John Karlson ... consultant to NASA" :^)

Karlson passed away in January of 1973. 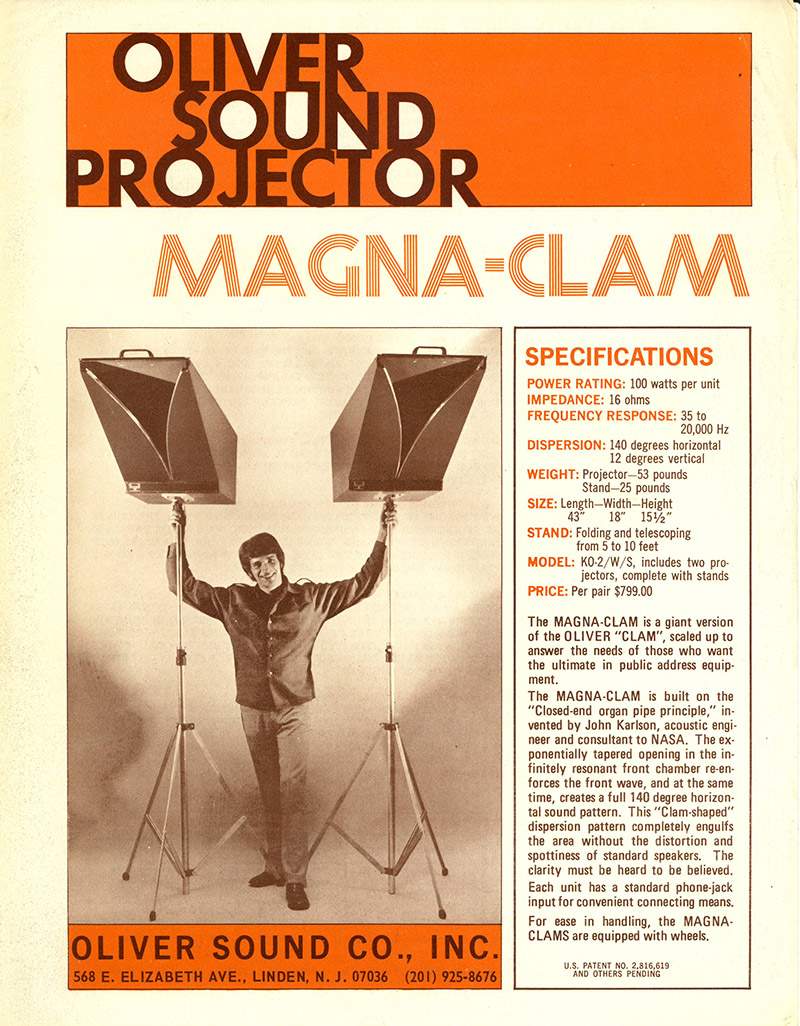 This was a lot more difficult that I would say at the first look. I think I learned to understand some techniques, next time it would be faster to do this. I am still not decided if this is going to print or not. I tried to make some transition from the circle to square at 10 mm (plate thickness + 5 mm below the angled part).

Here are some quick polar measurements. They confirm my impression, that they are more directive than the ARB-2 horns. They are not called sound lasers for nothing All the measurements are spaced roughly 10 degrees apart. Above means above the upper side with the slot down.

I would see the dispersion as 40 x 20 degrees, horizontally symmetrical and vertically on axis and 20 deg below. I would point the tubes slightly above listeners head and horizontally on axis or up to 10 deg off axis for nice symmetry. All that above ca 3.5 kHz.

fwiw - I think it sounds pretty good off axis.and up close That data looks good.

Re: "Sound Lasers" haha - interesting they achieve any directiviy at all for the small size involved. I believe
Carf Neuser said in PA work The Tube would be pointed at the back row of the audience. He also said
Ted Nugent used two of them mounted one above the other with tips butted.

What happens when a sizable baffle (relative to the Tube's base plate) is introduced at the driver exit plane? - Does that smooth the low end response?

By "above" the tube - I assume that means the mic was pretty much pointing straight down the tube - is that correct?

here's a couple of old graphs of mine 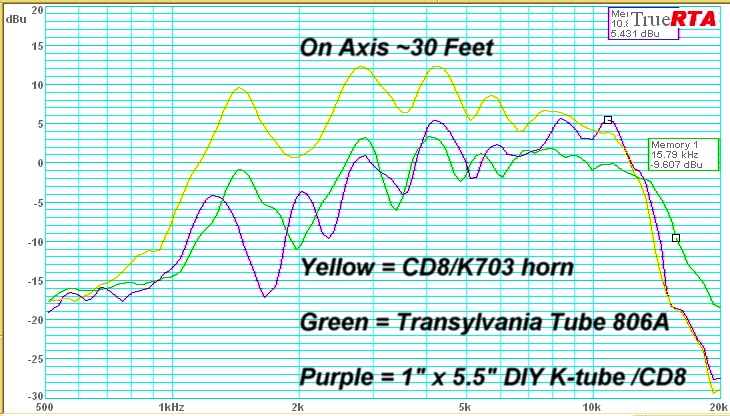 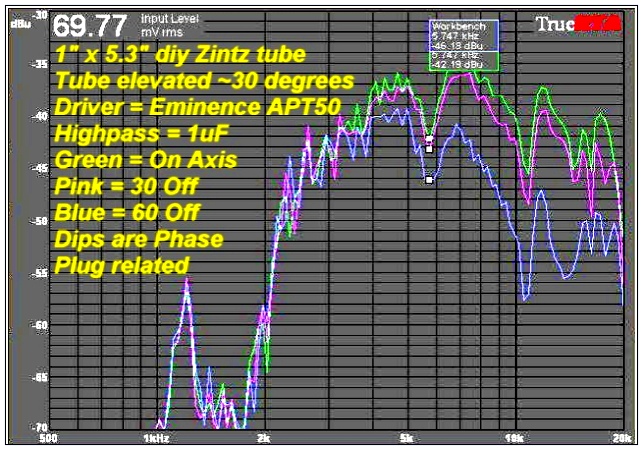 pelanj -In post 12 when discerning the tube's horizontal chararacteristics I gather the tube's long axis was parallel with the floor (?) If so, it would be interesting to see how the composite patterns look with the tube tilted 30 degrees "up". In practice, that type tube can sound pretty good - even Carl's extended length version of one Karlson X15 tube sounded nice (but measured rouigh due to its funky transitions from a little tube to the main tube - Carl said in that case it takes a lot of microphone points to tell the whole story (?) In my graph posted above, 30 off horizontal with the tube tilted 30 degrees was pretty mucH the same as 0 degrees. Going to 60 degrees off, things had dropped ~10dB by 10KHz. I should have taken off -horizontal axis curves at various microphone heights to see what happens.
Last edited: 2019-11-05 2:27 am
•••
P

I definitely need to take it outside to get some reliable data.
•••
P

A quick teaser - the mini Klam is already printed. It is waiting for me when I get back from my business trip¨

The thread function is built in I am having a test print made to see if I modeled a correct thread.
•••

re: the teaser = WOOOHOOO ! I bet that lens has only been heard by a handful in the entire world. The small size would make it nice to build into a mid/high module. When you get tiime tell me your thoughts for a "K6.5" as ordered some B&C 6PEV13 (HOPE they aren't clones as were very cheap !!)
•••
1

This is rather interesting could you post STL file? Thanks,
•••
P

I thought I already had posted it Here you are.